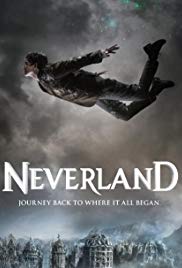 Storyline:
Raised on the streets of turn-of-the century London, orphaned Peter and his pals survive by their fearless wits as cunning young pickpockets. Now, they’ve been rounded up by their mentor Jimmy Hook to snatch a priceless, some believe, magical treasure which transports them to another world. Neverland is a realm of white jungles and legendary mysteries of eternal youth, where unknown friends and enemies snatched from time welcome the new travelers with both excitement and trepidation. These groups include a band of 18th century pirates led by the power-mad Elizabeth Bonny, and the Native American Kaw tribe led by a Holy Man, which has protected the secret of the tree spirits from Bonny and her gang for ages, and that has meant war. But as the fight to save this strange and beautiful world becomes vital, Hook, Peter, and the ragamuffin lost boys consider that growing old somewhere in time could be less important than growing up, right here in their new home called Neverland.
Written by
Anonymous
User Reviews: The cast, me being a Peter Pan fan and the fact I enjoyed Tin Man and Alice were what drew me into seeing Neverland. I was also dubious though as SyFy apart from a couple of surprises to me are notorious for making cheaply made, cliché ridden and terribly acted movies.

This in mind, while it is not quite as good as Tin Man and Alice, it is like them entertaining and interesting and alongside them and The Lost Future among the best SyFy have done.

Before I start, I didn’t see Neverland as an adaptation of the timeless Peter Pan story and I don’t think it was intended to be, more a prequel to it.

Is Neverland perfect? No it isn’t I don’t think. Neverland did bring some interesting ideas mostly scientific, which had potential to bring a fresh and intriguing slant to things. However, with a series this length, I would’ve loved more development to some of those ideas, the folded universe idea seemed great on paper but the finished product seemed underdeveloped and unnecessary.

Another thing is that I wasn’t taken with the performance of Aaya. She is beautiful, but she seemed too old, and seemed at times more awkward and bland than brave and dignified. The most disappointing asset was the last twenty minutes.

Now the first half was good, with a nice Oliver Twist-like opening and set up the story quite nicely. The second half was even better, it was more tightly paced and had a little more story. That is on the other hand until the last twenty minutes, which felt very rushed, particularly with Peter’s shadow which also felt tacky and forced.

Conversely, I very much liked the costume and set design, the sets were colourful and imaginative and the costumes were true to the Edwardian era and what I imagine pirates and Indians to look like. The special effects from the more scientific elements, the fairies and the crocodiles never do look that cheap and the opening seemed to have a very meticulous atmosphere.

The music is quite good too, maybe not quite good enough for a kind of "best musical score for a television programme/mini-series" award, but it does sparkle and has a sense of adventure. The story was interesting, paced well and with clever references. The sword fights are serviceable, not looking too clumsy, the dialogue is not too clunky and has some wit and of the relationships I found Hook’s and Peter’s on/off relationship and that of Hook and Elizabeth Bonny the most well done.

Neverland does have a great cast, with Aaya being the only glaring exception. Charles Dance is a great presence if deserving of more to do, and while not brilliant Kiera Knightley’s Tinkerbell was actually better than I anticipated.

I was taken with Charlie Rowe as Peter, I had seen him once before and didn’t like him much, but his Peter is spirited and loyal with some likability, though I noticed that Peter is not as cocky or as forgetful as I am familiar with him as. The best though were Rhys Ifans’ charismatic Hook, Anna Friel’s foxxy, beautiful Elizabeth and Bob Hoskins’s amusing Smee. I liked the depiction of the lost boys too, Slightly especially reminds me of a cuddly teddy bear and acting-wise the most promising was Curly.

Overall, something was missing, but compared to the piece of whatever it could’ve been it was a worthy prequel to a story that had stood the test of time for over a century and will continue to do so. 7/10 Bethany Cox

Storyline:Taking place in the 1990's, Huck and his card shark friend, Jim, travel from California to Nevada searching for Huck's long-lost grandpa. Along the way, a deceived card player chases the two across the state...