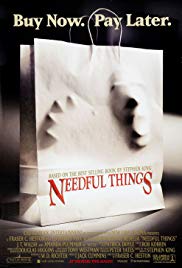 Storyline:
Castle Rock, New England, is a nice place to live and grow and Sheriff Alan Pangborn moves from the big city to the town expecting a quiet life. When Leland Gaunt opens the store Needful Things, he seems to have the object of desire for each dweller. He charges small amounts to the things but requests a practical joke for each of them against another inhabitant. Soon hell breaks loose in town with deaths, violence and riot and Sheriff Pangborn discovers that Leland Gaunt is the devil himself. Further, Gaunt is manipulating the population like puppets exploring the weakness and greed of each person.
Written by
Claudio Carvalho, Rio de Janeiro, Brazil
User Reviews: Needful Things (the movie) revolves around the fictional town of Castle Rock, Maine. A businessman named Leland Gaunt played adequately by Max Von Sydow opens a small antiques type store called "Needful Things" and has some very unique and special items for certain folks in the town. His only purpose to be in town is to wreak havoc with the folks in Castle Rock. He does this by trading special goods for certain pranks from the city people turning everyone against each other and poisoning their town. I think it’s important to try and separate a movie from it’s source…in this case the unequaled Stephen King Novel. Unfortunately I finished the novel hours before watching the movie adaptation which must bring the inevitable comparisons. I do believe even on it’s own, the movie lacks something…character development. We don’t know anything about these people, and for being a Stephen King story this is unfathomable. King always spends hundreds and hundreds of pages getting us to delve into a town, it’s people, each person and all their personalities. This film attempts to ignore all that and go straight to the root of the story which is an ancient evil (in this case made plainly out to be the devil) who wants to destroy this town. King created Needful Things in part to destroy elaborately his creation that is Castle Rock, the film simply wanted to take the so called best parts of that and recreate it. This film is not as good as it should be in part because of the fickle nature of movie goers who can’t stand to sit in a theatre for longer than 1 hour 30 minutes. For justice this film would have to be a mini series of a MINIMUM of 4 hours. The plus sides were most definitely the cast. Ed Harris played a strong, and powerful Alan Pangborn and Bonnie Bedelia was an intriguing yet sadly underused Polly. Sydow played a decent Leland Gaunt although the script could have done so much more for him. The supporting cast including JT Walsh as the already off balance Danforth (Buster) Keaton was nicely done. The film just left me begging and crying for a full adaptation from the book. I understand the writer or writers attempted to pull together the best they could but they fell short from an incredible book that has too many important elements that were left out. The film is enjoyable and probably moreso if you haven’t read the book. It just always feels like it’s missing something. It’s worth checking out especially if you enjoy King movies. 6/10