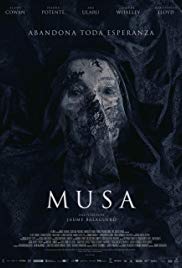 Storyline:
Samuel Salomon, a literature professor, has been off work for almost a year after the tragic death of his girlfriend. Samuel has been suffering from a recurring nightmare in which a woman is brutally murdered by a strange ritual. Suddenly, the same woman who appears every night in his dreams is found dead in exactly the same circumstances. Samuel sneaks into the crime scene and there he meets Rachel who has also dreamed about the murder. Together, they will do whatever they can to discover the identity of the mystery woman, entering a terrifying world controlled by the figures who have inspired artists throughout time: The Muses.
Written by
Filmax International
User Reviews: A literature professor and writer is involved with one of his students. After spending an afternoon together she slits her wrists.

A year later he’s still a wreck and has nightmares about some woman killed in a ritual. Suddenly the news show a woman killed just how he dreams it. His editor convinces him to investigate. He breaks into the house where the woman was killed and finds a mysterious picture of some men. He also runs into a girl who is also there investigating. They find a hidden door and steal some eggs-shaped lament configuration. They escape before the police grab them.

She’s a stripper. Her boss is keeping her passport until she pays him money back. She joins forces with the writer to research the dead woman and this picture of the men. The editor also helps. They discover the identity of the men, all are dead but one. They visit him. He talks about words, poerty and 7 (?) evil "muses." The muses eventually make contact with the writer–they want their egg-thing back.

We learn that the girl actually knew the dead woman and also knows about these muses. There’s something of a revelation.

Somehow they end up in psychiatric hospital, abandoned of course, where they’ll have to face the muses. Here the story connects with the girl who commits suicide in the into and we learn what the men from the photo where up to. There’s another revelation of sorts.

Muse is a long, slow, duller Euro multi-government-financed horror thriller directed with little inspiration. The story isn’t bad but director Jaime Belaguero doesn’t know what to do with the material. Elliot Cowan’s tired acting and poor voice recording doesn’t help a bit. Ana Ularu is adorable and does her best but she can’t carry the movie all by herself. There’s the occasional horror every half an hour or so, but there’s no serious attempt to frighten the audience or add some atmosphere, which shouldn’t have been too difficult. The exteriors of the psych hospital location for instance look spectacular. At least there some nudity at the beginning. The movie as a whole, as most horror movies has an overly dark and lifeless tone. Music is also atrocious, nothing but melodramatic piano that’s mostly out of place. The story tries to make a big deal about poetry, words, literature, but that doesn’t add any depth. Overall Muse is a missed opportunity and quite a failure.

Storyline:A poetic love story that follows Manchester and Noon as they enjoy a long, hot, summer romance. Noon is our narrator, a shy taxidermist who keeps a silent menagerie in the freezer alongside Manchester's ice ...