Storyline:Shinichi runs away from his problems and the people he fears. When Shinichi prays to the great Kawakami oak tree for courage, he is plunged into ancient feudal Japan. He awakens in the province of Kasuga, in...

Storyline:Mika is a fresh high school student who starts texting a mysterious boy. She is shocked when he reveals who he is - Hiro, a delinquent attending her school. What she doesn't know is that Hiro isn't as bad as...

Storyline:Yuri Kashiwaga was once known as a genius pianist. One day, she returns to her hometown in Goto Islands from Tokyo. There, she begins to work as a temporary teacher at a middle school and advisor for the sch...

Storyline:To get revenge on her ex-boyfriend and to help revive her late mother's tennis table club, a table tennis prodigy decides to take part in a mixed doubles table tennis tournament.User Reviews: 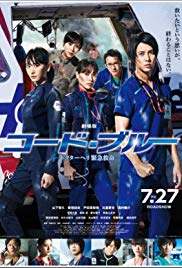 Storyline:The 'helicopter doctor' team is back with perfect hair, perfect skin and perfect body and ready to take on expected and unexpected disasters and accidents at Japan's Narita airport and points near and far. T...