Storyline:Forty-two students, three days, one deserted Island: welcome to Battle Royale. A group of ninth-grade students from a Japanese high school have been forced by legislation to compete in a Battle Royale. The s...

Storyline:Light Yagami finds the "Death Note," a notebook with the power to kill, and decides to create a Utopia by killing the world's criminals, and soon the world's greatest detective, "L," is hired to find the per...

Storyline:Kaiji (played by Tatsuya Fujiwara) is about to ave his life changed. The thrill is beyond anything hr, or most people, have experienced. The adventure is not without risk and danger however. he is given four...

Storyline:Oguri Shun plays Dazai Osamu who is one of the more popular novelists in Japan. Like most artists he has his vulnerabilities and exposures. In this case, the man is an alcoholic and lustful nomad. In other w...

Storyline:Makoto, an assassin who once was contracted by the government, has since become obsessed with tearing it down. Formerly, Kenshin was mainly concerned with protecting Kaoru, but the stakes are now higher as h...

Storyline:Three years after the events in "Battle Royale," Shuya Nanahara (Tatsuya Fujiwara)is a well-known terrorist bent on bringing down the government. In response, they order the creation of the "Battle Royale 2"...

Storyline:Kenshin wakes up to find himself at his master(Hiko Seijuro)'s house after getting washed by the waves to land while he was unconscious at sea for 3 days. Kenshin asks Seijuro to teach him the ultimate and p...

Storyline:Itou Kaiji is a bum who steals car emblems and slashes tires on what seems to be a regular basis. This routine changes one day when he is paid a visit by a man in a trench-coat. Once the two get talking, it ...

Storyline:A man, who is repaying a 30 million yen debt left by his brother, wins the 300 million yen lottery. He grapples with the question of whether money can buy him happiness.User Reviews: 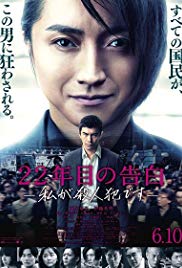 Storyline:A television reporter and a detective try to track down a serial killer known as the Tokyo Strangler.User Reviews: So this is a direct remake of a Korean thriller that came out a couple of years ago. Unfortu...