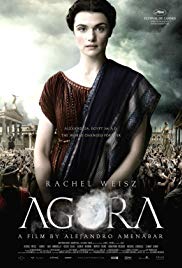 Storyline:Alexandria, 391 AD: Hypatia teaches astronomy, mathematics, and philosophy. Her student Orestes is in love with her, as is Davus, her personal slave. As the city's Christians, led by Ammonius and Cyril, gain...