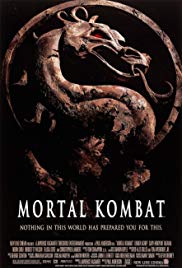 Storyline:
Based on the popular video game of the same name “Mortal Kombat” tells the story of an ancient tournament where the best of the best of different Realms fight each other. The goal – ten wins to be able to legally invade the losing Realm. Outworld has so far collected nine wins against Earthrealm, so it’s up to Lord Rayden and his fighters to stop Outworld from reaching the final victory…
Written by
CyberRax
User Reviews: 10/10 review, your eyes do not deceive you. "Mortal Kombat", simply put, is not only the best best game- to-film adaptations ever made, but one of my personal favorite movies of all time. I first seen this movie in the theaters in 1995. I was only five years old at the time! Back then it was a fantastic film, and in 2015, it’s still a great film! Maybe it’s nostalgia, but on the other hand compared to all the other overrated junk of 2014 and 2015, I consider this movie excellent and it is one of my favorites. This film and franchise even encouraged me to study martial arts for almost 15 years now.

Mortal Kombat, simply put, is a movie rendition of the original "Mortal Kombat" arcade video game. It’s about a group of warriors from Earth who compete in an ancient martial arts tournament for the fate of the world. In more than one way, it borrows many concepts/ideas from "Enter the Dragon", but on the other hand, it has it’s own unique twist and storyline to it.

Everything about this movie is awesome. Simple storyline with humor in the right spots, great casting, EXCELLENT choreography, and a fun soundtrack that still rocks today. In particular, this is one of my favorite fighting movies because the fights were excellently choreographed. Some standoffs between characters were extremely convincing and fun to watch. The fights were very dirty and not too over-the- top. They also paid homage to the video game with cool fatalities and even a funny "friendship" scene. Probably the ONLY weak spot in the film would maybe be some of the CGI (especially for Reptile); Reptile didn’t look great in 1995 and the movie aging 20 years has not helped! With that being said, the non-CGI Goro looks better than any junk they would probably try to make today.

It makes me very sad that the franchise (as far as the big screen goes) is in limbo. But at least we have this great classic filmed by Paul Anderson! If you enjoy video game films, martial arts, or the new age MK video games, I recommend you check this film out. It is a fun film and worth adding to your DVD or blu ray collection.

Storyline:After his father is killed in a car accident, things unravel for Kale Brecht and he is placed under house-arrest for punching his Spanish teacher. Having nothing better to do, Kale occupies himself by spying...