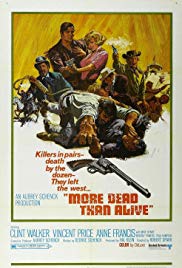 Storyline:
When the multiple murderer Cain is released from prison after 18 years, he wants to settle down as a rancher and never touch a gun again. But his former life haunts him; not only that nobody wants to give him a job, some villains also want to pay him back. So he has to accept the offer of showman Ruffalo to perform as “Killer Cain” in his traveling shooting show. However after 18 years without practice even Ruffalo’s young assistant Billy shoots better than Cain.
Written by
Tom Zoerner <[email protected]>
User Reviews: There are many films which the great actor Clint Walker made and a few became the foundation for the rest. In this film, which is one of his best, called " More Dead than Alive " is directed by Robert Spar and written by George Schench. It relates the unusual story of a multiple murderer, called Cain, (Clint Walker) who has paid the standard price for murdering several men, by serving nearly twenty years in prison. Now that he’s out, he finds a job with Dan Ruffalo’s (Vincent Price) wild west show. Earning honest money, Clain decides to capitalize on his infamous legacy while at the same time trying to go straight. Unfortunately, Cain’s past is slowly creeping in on his peaceful life-style and it only a matter of time before it catches up to him. At the same time, Clain tries to teach Billy Valence an envious and arrogant reputation-seeking gun-slinger (Paul Hampton) not to make the same mistakes he made. The story is a moral one which has influence many a writer and director in the following movie years. For Walker, the least we can add is that this film has become a Classic. ****