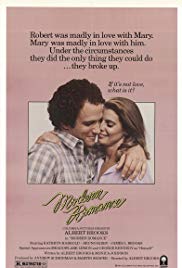 Storyline:
Robert Cole, a film editor, is constantly breaking up with and reconciling with long-suffering girl friend Mary Harvard, who works at a bank. He is irrationally jealous and self-centered, while Mary has been too willing to let him get away with his disruptive antics. Can they learn to live with each other? Can they learn to live without each other? The movie also provides insight into film editing as Robert and co-worker Jay work on their current project, a cheesy sci-fi movie.
Written by
Reid Gagle
User Reviews: If the world does indeed break down into Albert Brooks’ fans and detractors, then I’m definitely in with the former. We are probably something akin to "negatively charged quarks" while the others are "super strings?" As an experiment, I wonder if a relationship could brook both sides of the Albert spectrum and last outside a vacuum??

Anyways, this is a fine 90 minute (so street legal as a feature film) comedy that feels shorter. The alert level for "needy neurosis" on this should be set as high as the scale goes. Indeed frequently we hit the "cringe" zone that Larry David is mining these days with his "Curb Your Enthusiasm" and earlier with Seinfeld.

While there are not a lot of laugh-out-loud moments for me, I don’t think that is why the film moves so quickly. I think Brooks is just economical with what he shows us, I rarely feel (in any of his films) that he ever stoops to the audience. For the pace of this film to keep up is a tribute to the fact that its focus is a relationship that is going nowhere.

Even if it has to visit Idylwild to get to nowhere.

I suppose there’s a potential deeper level here in that people who look for trouble in a relationship, or in a sci-fi film with George Kennedy, can always find such trouble. Even if it requires looking to the level of ridiculous detail.

Of course most films from 20 years ago are dated, and while the song-based humor, the quaalude interlude and answering machine are dated as dressing to the film, I really don’t think the message is that far off mark today. If anything, I’d like to see Brooks take this a step further in the wake of Dr. Phil and others and deal with folks who NEED to have troubles in their relationships.

If you are looking for trouble in this film, go in expecting to identify with Brooks. Even when he hits moments that most of us could connect with (some exasperation with a parent, odd confessions to a co-worker, jumping back into the dating pool too quickly, getting swindled by salesfolks), he usually carries it to the level of lampooning. It’s funny for me, but I think some people want so badly to identify with such a lead character that they cannot let go at these moments.

Anyways, I think this is a film worth seeing, indeed you probably should arrange to see it on cable with a potential boyfriend/girlfriend on one of your earlier dates. If you both like it, things are looking good. If you both detest it, likewise. One up and one down….hmmm, maybe try "My First Mister" as a backup test?