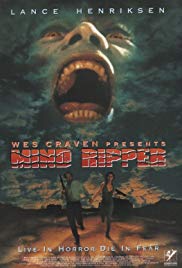 Storyline:
A top secret experiment intended to produce a superhuman has gone terribly wrong. Now the creators, trapped in a remote desert outpost, are being pursued ruthlessly by their creation. With the door sealed from within, there is no way out.
Written by
Tommy Henry <[email protected]>
User Reviews: Lance Henriksen is the name actor in this Wes Craven produced horror film. Set in an underground desert facility, it follows the events that happen after some government scientists inadvertently create a humanoid monster when they inject a virus into a dying man in order to save his life.

I have a bit of an immediate dislike of any sci-fi or horror films that fall under the category I can best describe as ‘corridors underground (or in outer space)’. These low budget genre films feature characters running away from a deadly enemy in confined locations with lots of corridors. The reason so many of these types of movies are made is that the sets required can be cheaply knocked together. The issue, however, is that the vast majority of them turn out to be very tedious and highly unoriginal. Mind Ripper is another in this line of not very good movies. This one throws some highly uninteresting family melodrama into the mix and needless to say it doesn’t add much value. The best moment for me was probably the part where the monster suddenly killed all the sympathetic characters in a frenzied attack; I was thinking at the time that this was quite interesting and a nicely unexpected turn of events. Turned out it was a dream sequence from the monster’s perspective. Sigh.