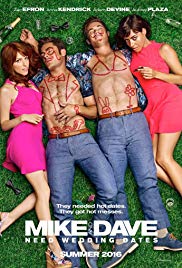 Storyline:
Hard-partying brothers Mike (Adam Devine) and Dave (Zac Efron) place an online ad to find the perfect dates (Anna Kendrick, Aubrey Plaza) for their sister’s Hawaiian wedding. Hoping for a wild getaway, the boys instead find themselves outsmarted and out-partied by the uncontrollable duo.
Written by
20th Century Fox
User Reviews: ‘Mike and Dave Need Wedding Dates’ had some promise when the trailers first came out. I honestly believed this film would capture the tone of the first ‘Hangover’ movie, but something went wrong early on.

1. I know this film was based on true events, and I guarantee the true events would have been far more entertaining than the ones depicted in this film. For he most part, the movie has a strong opening where we see how these two brothers party, but we also witness the aftermath of their wild antics. Things move well enough till we get to the point where they actually end up on Hawaii. At this point, things take a tumble off a cliff.

2. Mike and Dave and played by Adam Devine and Zac Efron respectively. These two make an okay pair as brothers, but Adam Devine (especially) pushes the limit. Aubrey Plaza and Anna Kendrick are probably the worst additions to the cast, cause they are terribly unfunny. You would assume both Devine and Plaza would bring a certain level of comedy and timing, but they unfortunately don’t and the jokes are misplaced.

3. I’m not saying the movie is completely unfunny, but the most you get are a few chuckles here and there. Efron and Kendrick are better actors to star in a film like this, frankly this is below their standards. This should have been a direct to TV or DVD movie which featured some unknown/up-and-coming actors instead of bigger names filling the void. The side characters are annoying as f#%k, which in turn lowers the bar on the comedy.

The movie fails to redeem itself and it’s only passable as maybe a rental. No one should waste their time and especially money on going to the cinema to watch this.