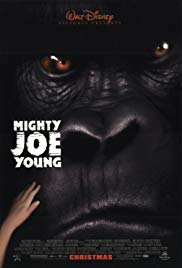 Storyline:
The baby gorilla left in her care grows up to become a hugely tall and broad specimen by the name of Joe, living in the mountains as a mostly unseen legend among people who live there. Along comes an eco-minded emissary from a California sanctuary, who talks the jungle girl into providing safe haven for Joe at the L.A. facility. The transition is not without discomfort, but everything is aggravated via a conspiracy of poachers to get Joe into their own greedy hands!
Written by
Anthony Pereyra <[email protected]>
User Reviews: A group of poachers kill a large gorilla and a female zoologist. The gorilla’s baby escapes with the woman’s orphaned baby and the two grow up together. Tears later the gorilla (Joe) and the girl (Jill) have grown up  Joe himself is abnormally large but is the target of poachers. Zoologist Gregg O’Hara stumbles upon the two on a wildlife visit to the jungle and convinces Jill to bring Joe to a sanctuary in California. However, despite the safety, the threat to Joe has not vanished.

I ignored this on video and at the cinema but on TV I gave it a go for the same of the kids. The first thing that strikes you is how much of a rip-off of every monster movie you’ve ever seen  from King Kong onwards. All the clichés are there and the characters are little more than cardboard cut outs at times. However it is still good fun and all delivered with energy that will keep the kids happy. The film may not go anywhere that you don’t expect but it has funny moments and also moments that are quite tense and exciting.

Of the cast Joe stands out. His facial expression, depth of understanding and emotional range may be a little unlikely but he looks good. The effects may occasionally show the joins where Joe interacts with physical objects but for the vast majority he is impressive  for the most part I forgot it was effects and totally bought into him being real, that’s a sign of good effects. Paxton maybe takes it all a bit seriously but does well, Theron is a bit too street smart for a girl who grew up with a gorilla but she passes. Support like King and Paymer are underused and simply become more examples of `good Americans’. If you’re being cynical you could say that the two leads are WASP heroes and that King (black) and Paymer (Jewish) were there to cover bases! This view is a little supported however by the hackneyed casting of white South African and Eastern European types as the bad guys  their roles are caricatures at best and the actors look embarrassed at times.

Overall it’s enjoyable. It’s not great  the plot is flawed, the acting is so-so, it borrows from every big ape movie that has gone before and it’ll never be remembered years from now as a great film. But it’s good for kids without boring adults. The effects are good and, though you’ll forget it quickly, it’s fun while it’s on.