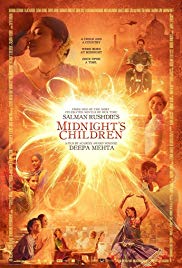 Storyline:
A pair of children, born within moments of India gaining independence from Britain, grow up in the country that is nothing like their parent’s generation.
User Reviews: Only occasionally does a movie portray a culture in a time and place that truly succeeds in giving you a sense of what it was like there. I think of Like Water for Chocolate for example. I was totally blown away by this film’s ability to somehow transport me back to India, capturing all the craziness, the colours, the confusion, the sensibilities…. I only spent six weeks there but my son who worked there for a year and a half agreed with me. I think that it is a very unusual film for western viewers. The symbolism is so important and rich. We are not watching individuals at all but characters who represent elements of the country that the writer and director are passionate about. The pace and length is absolutely essential to get the feel of how vast the story is. The camera-work is breathtaking, the music is absolutely authentic, I felt that I could even smell India again. I noticed that the reviews by western critics were mostly negative while those from India were the opposite. If you want to enjoy this film, leave your western film expectations at home and come with an openness to a different way of seeing, learning and experiencing. I will encourage everyone I know to treat themselves to this wonderful film.