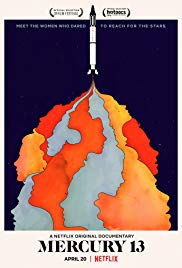 Storyline:
This documentary profiles women who were tested in 1961 for spaceflight, but had their dreams dashed when only men were chosen to become astronauts.
User Reviews: Everyone should see this, and since it’s on Netflix, it’s easy. This episode in the history of the USA space program was a reflection of the 1960’s society of the time, but obvious echos still ring today. A doctor attached to the Mercury space capsule program, Dr. Lovelace, started a program on his own initiative to recruit women pilots for possible astronaut training. The ones who passed all the (sometimes bizarre) physical tests, the "Mercury 13", had high hopes of going further but NASA, Congress, and VP Lyndon Johnson summarily dismissed it for reasons that were nothing more than blatant sexism. All the women were accomplished pilots and first-rate human beings by any standard, but the arbitrary "rules" of qualification for astronaut training were such that no woman could meet them — despite the fact that no piloting was even needed for Mercury capsules; the astronauts were just "spam in a can" as the saying went.

These ladies drew career inspiration from a still earlier generation of women pilots who flew in WWII (the WASPS), including Jacqueline Cochrane who features prominently in the doc. Cochrane herself wanted to be an astronaut, but didn’t pass the physicals that the younger women did, and later on betrayed them during crucial Senate hearings about the astronaut program. John Glenn, the fair-haired hero of these early stages of the space program, also comes in for some criticism; he’s someone who could have given meaningful support to the women at a critical stage, but did not.

Just like these womens’ hopes, the Mercury 13 history has been largely buried, so this doc is very timely. A number of them are still around to be interviewed and tell their story first-hand, and boy are they great to hear. (Dr. Lovelace’s daughter is an interviewee as well, and she’s excellent.) It’s easy to get outraged on their behalf, but that might be too simplistic. Listen to them first. They in turn have clearly been role models and inspirations for the women who have now become a regular part of space exploration.

The chronology of this film is frequently spliced in with absolutely gorgeous flight scenery accompanied by a graceful, soaring musical score. Oh, the magic of flight. Those scenes alone make it worth seeing this fine production.