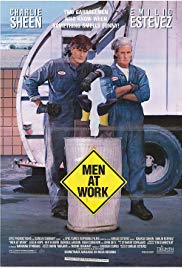 Storyline:
Carl and James are two pleasant but unambitious garbage men. Carl has a telescope with which he observes his neighbors. One evening he sees a man giving a female neighbor a hard time. As she leaves he shoots the man with a pellet gun. Hiding, he and James miss two men strangling the man and leaving with the body. When he appears in a can on their route they are afraid and hide the body, fearing that they may be implicated in the death. Trying to crack the case, they spy on the woman, join up with a slightly to majorly crazed Vietnam vet, kidnap a pizza man and help to protect the ecology.
Written by
John Vogel <[email protected]>
User Reviews: Men at Work is written and directed by Emilio Estevez, who also co-stars with brother Charlie Sheen, Keith David, Leslie Hope, Dean Cameron and John Getz. Music is by Stewart Copeland and photography out on locations that include beaches at Redondo and Hermosa, is by Tim Suhrstedt. Plot finds Estevez (James) and Sheen (Carl) as two carefree garbage collectors who find a dead body in a barrel during their rounds. Trouble is, is that the dead guy is the man Sheen shot with his pellet gun the previous evening. Thinking they might be responsible for his death, and prompted by their newly acquired chaperon, cop hating Louis Fedders (David), they unwisely decide not to call in the cops. So with an unhinged Vietnam War vet and a dead body on their hands, Carl and James are in big trouble.

Undemanding picture that’s more enjoyable if you happen to be a fan of either Sheen or Estevez, Men at Work often struggles for laughs but is intermittently lit up by the odd humorous moment that comes with a side order of cool. There’s a little drama in the mix, and even a delicate hint of social commentary via the illegal toxic waste dumping core that the frivolity is wrapped around. But really this is all about the two Brat Packers running free and Keith David superbly stealing the movie from the both of them. When the "we got a dead body to keep from the cops" comedy runs out of steam, and it does a little too early in the piece, it’s left to David to bring the laughs with his cop hating rants and coiled spring like intensity ready to unleash on anyone who gets in the way or dares to eat his fries. Hope is amiable and pretty, though she only serves as a love interest for Sheen, while Getz isn’t in it much and the two hit men on the boys tail don’t bring anything new to that well trodden comedy table.

When it hits its comedy stride, the funny sequences that drop in are just that, funny (golf clap, the nasty, human waste exploding balloons, Keith David), but these moments only serve to highlight the scripts shortcomings elsewhere. 6/10