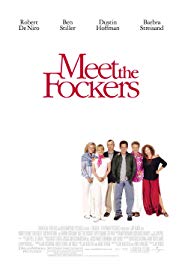 Storyline:
Having given permission to male nurse Greg Focker to marry his daughter, ex-CIA man Jack Byrnes and his wife travel to Miami to Greg’s parents, who this time around are Mr. and Mrs. Focker, who are as different from them as can be. As asked in the first movie, what sort of people name their son Gaylord M. Focker?
Written by
Uber Minion
User Reviews: This is an incredibly funny movie. I can’t believe the lackluster reviews that this film has received. It’s one of the most consistently funny films to come out in recent memory. I (and the rest of the audience for that matter) laughed hardily throughout. Dustin Hoffman, Robert Deniro and Ben Stiller are great. The female characters aren’t given much to do, but give adequate performances. Not being a Streisand fan, I was a little apprehensive about her casting, but am pleased to say that she is very good in the role and stands toe-to-toe with hubby Hoffman. The movie is quickly paced and provides very little "down time" where the comedy bogs down. It’s a great mix of slap-stick, witty banter, strong comedic performances, crude humor and even cutesy fowl mouthed toddlers. To me all these high brow critics need to lighten up. Comedies should be judged by whether or not they are funny and that’s it. The bottom line with this film is that it’s hilarious. All those critics are coming off as smug ass hoooooooooles.