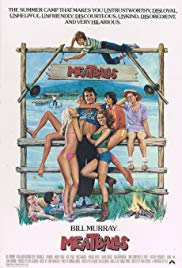 Storyline:
Summer Camp highjinks centered around a camp counselor with a wacky sense of humor. He tries to help the campers have a good time. One camper named Rudy poses a particular challenge as he has a self-esteem problem
Written by
Robert Svacha <[email protected]>
User Reviews: I just saw this for the first time in 10 or 15 years…maybe close to 20. In some ways, it was better than I remembered…in other, it was MUCH worse.

First of all, there’s the music. It’s just plain awful. There are only 5 songs in the movie, most of them used more than once. The opening song is shrieked by a chorus of annoying children, and the disco-y title track is performed by Rick Dees. It doesn’t get any worse than that. Even the background music is terrible, with much of it repeating the themes of the other nauseating tunes. We also get some truly lame slapstick, mostly in the opening credits.

On the other hand, Bill Murray is spot on brilliant as usual…you have to wonder if he ad-libbed the whole thing, or if the writers just gave him all the funny lines. Or maybe he’s just that great- turning a weak script into comic genius. The best part are his surreal PA announcements. ("Lobsters…get out of here…you’re a menace!")

You also get a lot more character development than you have any right to expect in a movie like this. At least half the characters seem like real people…and mostly real people you would like to have around. Even "Spaz" gets to do a more than any other Eddie Deezen-type character ever did, and when he gets the girl, it’s plausible. (She’s not absurdly hot, but he doesn’t automatically pair up with one of the nerd girls- see "Revenge Of The Nerds" for examples of both cinematic phenomenons.)

And when the plot seems clichéd…well, ya gotta wonder if it wasn’t a cliché yet when they made this. While it wasn’t the first summer camp movie- ya gotta go back at least to "The Parent Trap"- it’s certainly the movie that made it it’s own genre. In fact, I was surprised that there was no Talent Show scene…"Wet Hot American Summer" spoofed the summer-camp genre so perfectly, I just assumed everything in it came straight out of Meatballs. (I also half-expected Jon Cryer to pull up in a convertible with a chimp, thanks to "Mr. Show’s" epic camp-olympiad spoof "Monk Academy")

Anyway, this one seems to be vanishing a little as far as the late-70’s/early 80’s comedies- it’s not a cable staple anymore, and certainly doesn’t have the cult following of Caddyshack or Animal House. I was pleased to catch it on Showtime today- and in High Definition at that! Sure, it’s pretty awful in spots, but you could do a lot worse in a 70’s/80’s teen comedy. And again, Murray is a genius.

Storyline:Tanya returns to the scene of the crime to rid herself of nightmares of the horror that occurred three years earlier.User Reviews:

Storyline:A chauffeur kidnaps his rich boss's dog to hold it for ransom, but when she accidentally gets the dog back, she thinks that it's the chauffeur who's been kidnapped.User Reviews: Just like Norm McDonald's las...

Storyline:To send humanity to a distant galaxy, the mysterious CEO of The Fuller Corporation must develop a cutting-edge computer-brain interface to keep his hibernating colonizers safe and sane for a journey of unkno...