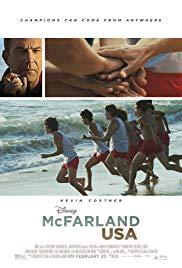 Storyline:
A struggling coach and teacher who has had to move around for different incidents in his career finally comes to one of the poorest cities in America: McFarland, California. There he discovers buried potential in several high school boys and slowly turns them into championship runners and brings them closer than even he could ever imagine.
User Reviews: "These are good kids, smart kids. They just need a chance at a better future." Jim White (Costner) is a football coach at a prestigious high school. After a halftime outburst he is fired and takes a job in McFarland high as an assistant football coach. When a disagreement strips him of that position as well he isn’t sure what to do next. When he sees one of the students running he decides it’s time for the school to have a cross country team. Fighting with the runners, parents and school he does his best to transform the students, the school and the community. In terms of movies there is really one sure bet. If you put Kevin Costner in a sports movie it’s gonna be good. Even with those high expectations this did not disappoint. The movie is tremendously inspiring. While watching there is a way you want it to end, and you are right there training and running with them hoping for the outcome you desire. The only bad I can say about it is that I liked his other ones better, but only because I like football and baseball more than running. That in no way diminishes the greatness of this movie though. Overall, Costner proves again why he is THE choice for sports movie actors. I give this an A.

Storyline:Four adventurous friends find 50M in cash at a remote island only to discover it was left by the DEA for the Cartel in a rogue deal.User Reviews:

Storyline:Nick's rich Uncle makes a deathbed request: "Give away my fortune and help me save my soul." But the minute he starts, it all goes haywire. His evil twin steals his fiancé, and giving away the cash backfires...

Storyline:It's 1984 and outside a small-town nightclub, a group of 8th graders gather, grappling with a spate of recent suicides, UFO sightings, their absentee parents, and each other.User Reviews:

Storyline:A diverse set of characters find themselves together in a old diner in a small town on Christmas eve during a snow-storm. While a young expecting couple tries to make it home on a night that's anything but s...

Storyline:Katherine Morales, a woman not married to the President, runs for First Lady, but she winds up getting a better proposal than she ever expected. First Lady is a classic romantic comedy with the backdrop of P...