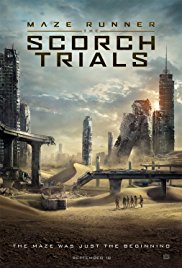 Storyline:
The second chapter of the epic “Maze Runner” saga. Thomas (Dylan O’Brien) and his fellow Gladers face their greatest challenge yet: searching for clues about the mysterious and powerful organization known as WCKD. Their journey takes them to the Scorch, a desolate landscape filled with unimaginable obstacles. Teaming up with resistance fighters, the Gladers take on WCKD’s vastly superior forces and uncover its shocking plans for them all.
Written by
20th Century Fox
User Reviews: Lets face it. The Maze Runner films are not great. They are good, but not that good. While the film was fun to watch it was full of already seen scenes. Not really original. Director did a good job, not that bad. Screenplay could have been better. You expect to see some of the cool post-apocalyptic cities and landscapes, but you do not get enough of that. A lot of cliché moments in the film. Should have been a little shorter. Also there are some illogical decision that characters made in the film, cannot really get into it without spoiling something. They tried to give it a little twist but it was not that surprising. Irritated me a little bit. Acting was good. I actually liked how they edited it out, not bad. Cinematography is good. All in all a good, fun film to watch. Everyone knew it was not going to be a masterpiece.

Arguably maybe it even deserves 6/10. I was wondering what to give it, but because I like these kind of films it made my decision easier and I gave it 7/10.