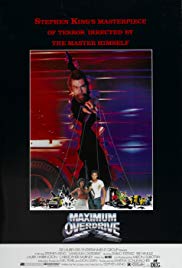 Storyline:
When Earth passes through the tail of Rea-M rogue comet, the machines come to life and start to kill mankind. A group of survivors is under siege from fierce trucks at the Dixie Boy truck stop gas station and they have to fight to survive.
Written by
Claudio Carvalho, Rio de Janeiro, Brazil
User Reviews: Stephen King wrote and directed this much-maligned film adaptation of his short story "Trucks." The plot has Earth passing through the tail of a comet, which somehow causes all the machines on Earth to come to life with murderous intentions. A group of people find themselves trapped in a truck stop surrounded by semi-trucks and other vehicles. The trucks, led by one with a huge Green Goblin face on the front, wait for the humans to leave the truck stop so they can kill them one by one.

This is one of my favorite guilty pleasures from the ’80s. It’s a ludicrous popcorn movie with an awesome soundtrack by AC/DC and a cast that includes Emilio Estevez, Pat Hingle, Frankie Faison, Laura Harrington, and Yeardley Smith. Stephen King appears in a funny cameo at the beginning. This movie was HATED at the time and remains hated today, at least by stuffy film snob types. It’s a fun movie! Not everything has to be high art. For people who are fans of silly and cheesy movies, this is right up your alley. Auto nuts might also like it for all the different old vehicles on display. Ignore the critics and give it a shot.