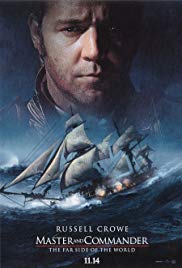 Master and Commander: The Far Side of the World (2003)

Storyline:
In April 1805 during the Napoleonic Wars, H.M.S. Surprise, a British frigate, is under the command of Captain Jack Aubrey. Aubrey and the Surprise’s current orders are to track and capture or destroy a French privateer named Acheron. The Acheron is currently in the Atlantic off South America headed toward the Pacific in order to extend Napoleon’s reach of the wars. This task will be a difficult one as Aubrey quickly learns in an initial battle with the Acheron that it is a bigger and faster ship than the Surprise, which puts the Surprise at a disadvantage. Aubrey’s single-mindedness in this seemingly impossible pursuit puts him at odds with the Surprise’s doctor and naturalist, Stephen Maturin, who is also Aubrey’s most trusted advisor on board and closest friend. Facing other internal obstacles which have resulted in what they consider a string of bad luck, Aubrey ultimately uses Maturin’s scientific exploits to figure out a way to achieve his and the ship’s seemingly impossible goal.
Written by
Huggo
User Reviews: The British Navy ruled the waves throughout the nineteenth century and this film captures some of that spirit rather well. The cast is excellent, Crowe in particular shining as the captain. The battle scenes between Anglo-French vessels are very entertaining, the cannons blasting great big holes into enemy ships! The story itself is not going to set the world on fire, but its all done very nicely. The film offers a glimpse of what life at sea was like during the Napoleonic Wars and anybody with an interest in history should catch the film. A few more battles would have been nice, but there you go! It’s over 2 hours long, but doesn’t drag. One to watch definitely.