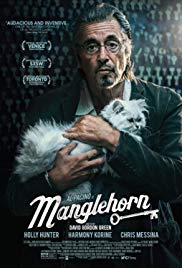 Storyline:
A.J. Manglehorn is a reclusive Texas key-maker who spends his days caring for his cat, finding comfort in his work and lamenting a long lost love. Enter kind-hearted bank teller Dawn whose interest in the eccentric Manglehorn may just be able to draw him out of his shell.
Written by
IFC Films
User Reviews: Manglehorn was warmly received at Austin’s SXSW Film Festival. It isn’t Al Pacino’s best work. Of course, he is no longer the Pacino of Dog Day Afternoon, Godfather, Serpico, Scarface, Scent of a Woman and Heat, but he is still better than most. The script is solid, but not extraordinary. The film is mostly a one-man show. However, I honestly believe I would enjoy watching a film about Al Pacino watching paint dry. Pacino is just a pleasure to watch even now as an aging legend his intense screen presence remains. He is remarkable to watch when he is changing a light bulb or feeding a cat. In this film he plays an elderly locksmith who has been wounded by a long lost love and is trying to learn how to trust again. His on-again off-again attempt to build a relationship with Holly Hunter and to reconnect with his estranged son played by Chris Messina – is certainly enjoyable. Underneath his tough interior there seems to be a heart of gold that is often only shared with beloved cat. He has so often played larger than life characters, but here he has taken on a much more ordinary and blue collar identity. The charisma is still there, but so much more of the character’s emotions are internalized. We are left to wonder about all the events that have led up to who he has become. Recommended for all fans of good drama and of one of the greatest actors of our time.