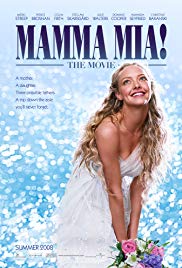 Storyline:
Set on a colorful Greek island, the plot serves as a background for a wealth of ABBA songs. A young woman about to be married discovers that any one of three men could be her father. She invites all three to the wedding without telling her mother, Donna, who was once the lead singer of Donna and the Dynamos. In the meantime, Donna has invited her backup singers, Rosie and Tanya.
Written by
[email protected]
User Reviews: Mamma Mia! Does the mention of anything Abba-ish send you cringing to a corner? Or are you already joining in and dancing on the tabletops? Maybe another few drinks . . .

In short, if you are not allergic to Abba, book your tickets now. If you are, why would you be reading this? At a pinch, it is worth seeing for Meryl Streep alone, who not only throws herself headlong into every refrain with unashamed gusto, but adds a touch of class and nuance to what otherwise could be a one-dimensional adaptation. Streep vacillates engagingly between playing herself and not taking herself too seriously. Pierce Brosnan just about keeps up, and manages more expressions than he ever did as James Bond. Colin Firth and Julie Waters trail behind somewhat. Yet Mama Mia! is a roller coaster of emotion, careering colourfully from the blue waters of the Adriatic, bursting ‘like Aphrodite’s Fountain’ into the lives of Donna (Meryl) , her lovers and friends, and her soon-to-be-wed daughter. It is the party spirit that says kick your shoes off and sing silly cheesy songs. Altogether now.

And yes  there’s a story. Donna’s daughter Sophie is getting married. To the buff-looking Sky. Only  where’s her dad? She’s never met him. A sneak-peek at Mom’s diary shows Mom had three lovers before Sophie was born and Sophie secretly invites all of them. This is a film of threesomes. Three past lovers (Sam, Bill and Harry). Three close friends (Donna and two best pals). And, not to be outdone, Sophie meets up with two other young girls at the start of the film.

The breakneck pace still allows for brilliantly put together shots. Like Streep doing a ‘Titanic’ with drapes blowing in the wind. Or a pier-load of young hunky stag night crew doing a dance in trunks and deep-dive flippers. Moonlit boats and beaches to "I Have a Dream." Filmed on location, the views won’t disappoint. And like a favourite song whose ending we know, the drama is in the details and execution.

As with many adapted-from-stage musicals, two young leads are played by talented singers, and the older parts by serious actors can sing well enough. Streep manages extremely well. Her performance is so professional and assured it leaves others standing. Fortunately, it is perhaps easy to paper over any cracks in musical comedy. Sweeney Todd relied heavily on Depp’s charisma and stunning cinematography. Across the Universe, too heavily on the songs. Mamma Mia!, on the other hand, simply tailors everything to its joyous headlong rush. The songs fit naturally to the action. Streep even manages to sing them with her tongue firmly in cheek. She confesses to having been a "stupid reckless little slut" but then says she "grew up". (To which her pals chime in, "Well grow back down again!") The film is not without faults. There is a notable lack of chemistry between the people that throw themselves rapturously against each others’ faces. Even Streep looks less than convincing in a brief lips-mash. And the men are a bit croaky in the singing department (Hugh Grant might even have been a preferable casting choice). And some of the time-line is wobbly. For instance, strange as it may seem, music from more than twenty years ago does not all come from the same era. So reminiscing about flower power (early sixties) in the same breath as a Johnny Rotten t-shirt (Sex Pistols, mid-late seventies) is either anachronistic or wishful thinking.

Sadly, I am of a generation that can remember Abba-mania. The records would shoot to number one. Yet even then few people would admit to buying them. I used to manage a night club, and Abba was great music to ask a girl up to dance. My entire chat-up repertoire at that time consisted of, "Would you like to dance?" and "Do you want to come back for a coffee?" But girls would be so happy dancing to Mamma Mia they’d say yes anyway. I’d fall in love with a new girl each week. Ah, those were the days! Now there’s a new generation of Abba fans who have no need to ‘come out of a closet’. Abba is retro-chique. Even Madonna segued an Abba riff into one of her songs. From karaoke to hen nights. From ’70s’ nights to gay dance-floors. Dress up. Camp it up. Sing it up. Get sassy and cheesy. Or, if you’re old enough to remember, fly back in time to wonderful memories.

Mamma Mia!, whatever detractors might say, has been one of the most successful stage shows of recent times. Supported by the same director and original band members, the movie may well reach the similar fan bases. Or just the party spirit in all of us.

Storyline:An incompetent time traveler must team up with his unpredictable alternate self, to fix a paradox which is now slowly destroying the universe.User Reviews: