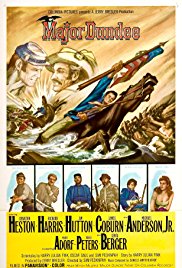 Storyline:
During the last winter of the Civil War, cavalry officer Amos Dundee leads a contentious troop of Army regulars, Confederate prisoners and scouts on an expedition into Mexico to destroy a band of Apaches who have been raiding U.S. bases in Texas.
Written by
scgary66
User Reviews: Originally intended as a searing epic by director Sam Peckinpah, Major Dundee was taken away from his guiding hands post production and edited into an almost incoherent mess. Here in the new millennium we are able to see a restoration of the film with added scenes that gives the film are more cohesive structure, and yes it improves the film ten fold because the characters have flesh on their bones, yet still we are only really glimpsing three parts of Peckinpah’s vision since there is another 30 minutes of film seemingly lost forever, and that is a crying shame because this film could have been a western masterpiece had it been allowed to flourish.

There is still a lot to enjoy here tho, Major Dundee leads a rag tag army of Union soldiers, Confederate rebels, convicts, loonies, and a one armed James Coburn into Mexico to hunt down an Apache army who are responsible for deadly attacks on U.S. bases in Texas. It’s not so much The Dirty Dozen, but more like the dirty army! And in the main here it’s the fractious nature of this assembled army that gives the film its vigour and selling point. Almost certainly the film is one of the forerunners of Vietnam allegories, and like it or not it’s the thematic undercurrent of soldiers under prepared that keeps the film above average.

The cast are fine, it’s like a roll call for the macho assembly, Charlton Heston is Dundee, a big square jawed brash man who tries to keep this army in line whilst dealing with his own nagging ego. Richard Harris owns the film as Tyreen, his on going personal war with Dundee gives the film added impetus. James Coburn plays a very interesting character, but it’s a character that demands more time on screen than we actually get (perhaps the victim of the cretinous cuts?), and it leaves a hankering feeling that never quite leaves you.

It’s a fine journey, it’s a fine character piece, and everyone also note that the wide screen shoot is gorgeous, but at the end of the day Major Dundee is only hinting at the genius that would deliver The Wild Bunch four years down the line, but it could have been so much different…

Forgive them for they know not what they do. 7/10