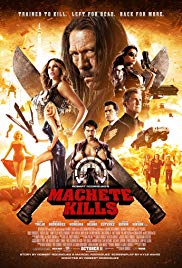 Storyline:
The U.S. government recruits Machete to battle his way through Mexico in order to take down an arms dealer who looks to launch a weapon into space.
User Reviews: There was a scene in the original Machete that featured the title character, played by Danny Trejo, removing the intestines from someone in a hospital and using the lengthy apparatus to swing down to the lower story of the hospital by crashing through the window. Long story short, it had to be seen to be believed (and comprehended) and that kind of consistent, rather fresh humor was what kept the film buoyant. When Machete grabs a hold of a man’s intestines and throws them onto the spinning blades of a helicopter, all while the intestines are still attached to the man, the feeling of gross absurdity isn’t so much a gory little stint of humor but a rehashed gimmick that brings significantly less pleasure to a viewer.

Robert Rodriguez’s Machete Kills is a fine sequel, well-shot, directed with respect to exploitation films of decades past, and plays the kind of instruments you’d expect for this kind of genre piece. The issue is that after a collaboration between Rodriguez and Tarantino to bring us a "Grindhouse" style double-feature in 2007, along with a feature-length Machete film spawned from one of the double-feature’s fake trailer, the joke has run its course. We know the filmmakers are not serious. We know they want to gimmick seventies style cinema. And we know that the actors get the joke. The big news here is we, the audience, get the joke as well, and Machete Kills functions and conducts itself narcissistically, repeatedly telling the same jokes over and over as if we’ve never heard them. This is the equivalent to that knock-knock joke that went around the playground circa first or second grade.

Trejo returns as Machete Cortez, a ruthless spy who is summoned by U.S. President Rathcock (Charlie Sheen using his birthname "Carlos Estévez") to stop a mobster named Mendez (Oscar-nominated actor Demián Bichir), who has a large missile pointed at Washington D.C.. While trying to stop Mendez, Machete becomes tangled with arms dealing terrorist Luther Voz (Mel Gibson), who is working out a mission to try and create anarchy and civil unrest in several countries in the world. Armed with a crew of ladies such as Madame Desdemona (Sofia Vergara), La Camaleón (Lady Gaga), and Miss San Antonio (Amber Heard), it would be gravely difficult for Machete to lose this battle.

Machete Kills, for starters, makes the same error that almost cost its predecessor its credibility. The film begins with a "prevue" for Machete Kills Again…In Space, starring the likes of Danny Trejo, Michelle Rodriguez, Lady Gaga, Justin Bieber, and Leonardo DiCaprio (subject to change), which is presented with convincing film-grain, seventies-era cheapness, and pleasantly scuzzy picture quality. What follows is "our feature presentation," which appears to be a grossly modern action epic starring big name actors (one of them is a pop singer for Christ’s sake) and clearly shot with high quality HD cameras only assisted by strong special effects work. No film grain, no popping sound, no fuzziness to the picture quality. Just the unsurprising clearness of audio and visuals we’ve grown accustomed to in 2013.

I give a huge amount of credit to the Grindhouse film that was released in 2007, as it clearly had intentions to replicate and portray what one would likely see in a seamy theater downtown, showing the latest low-budget action flick for $2 in a theater with colorful individuals, cigarette smoke, and a sticky floor. However, Machete Kills provides for the same kind of soulless action movie experience we’ve seen time and time again. And with names like Lady Gaga, Jessica Alba, and even Danny Trejo, who finds his name plastered on more and more direct-to-DVD messes each year, it’s hard to feel like we’re back in time.

There is something I can’t deny and that’s the inanity of everything and everyone involved. Machete Kills is the rare film that can simply have fun with itself and that’s something I truly respect and did respect in the original film. Trejo’s tough-guy screen presence successfully carries over to the sequel, and the onslaught of actors such as the aforementioned females and other minor touches such as Mel Gibson and Cuba Gooding, Jr. provide for some much-needed smiles. It’s also pleasant to note how the film evades cynicism and disregards action movie conventions in favor of a truly unpredictable series of events. Consider an early sex scene between Miss San Antonio and Danny Trejo. During the foreplay, an on screen title card urges us (by flashing and repeatedly binging) to "put on our 3D glasses," which we don’t have. After about ten seconds, the film’s image becomes blurry and incomprehensible thanks to the known reddish-bluish hue the retro 3D put on older films. This kind of humor is what keeps Machete Kills alive and well.

If there is a Machete Kills Again…In Space (which I’m beginning to doubt due to the dismal performance of this film at the box office), I’ll certainly be in line to see it. However, in order to work efficiently, it will need to take a true step backwards and mimic the style of the much-loved (and trashed) space films of the 1940’s and 1950’s. It will need to replicate the cheesiness and the stupidity of it all, embrace its origin, add film grain, rely on its wits and respect to the time period, and cease with the glossy appearance we’ve come to accept in modern times. The Machete franchise is at that frightening point in its time where its next film can either make it or let everything it has built up until this point collapse; the sad thing is this is only its second chapter.