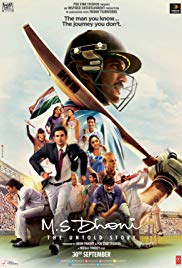 Storyline:
Mahendra Singh Dhoni is a goalkeeper in school football team.Bannerjee a school cricket coach asks him to join his cricket team and practice daily with him for two hours time passes and he becomes a big state level cricketer but for a long time his luck doesn’t favor him to become a member of Indian Cricket team.Dhoni takes up a job in Indian Railways as a ticket checker and plays cricket for the railways after long wait of 4 years he gets selected in Indian Cricket team and turns to be one of the best cricketing captains in history of Indian Cricket.
Written by
[email protected]
User Reviews: M.S. Dhoni had a burden of expectations on it – not just because it is based on India’s most beloved captain but also it had Neeraj Pandey as Director. The movie is well made but runs into too much of unnecessary stuff, especially in the second half. It is pretty much left on its own in the later part. Sushant Singh Rajput is bloody impressive with his uncanny resemblance to MSD, not just in terms of looks but also the expressions.

Story (7/10): The movie focused really well on the life of MSD before he became a household name. It focused a lot on the challenges, small town boys had been facing to get an entry into Indian cricket team about 10 years back when metro boys, especially Delhi and Mumbai, had a great influence on the team composition. What I also loved was the portrayal of Dhoni’s work ethic – be it the scene of Yuvraj Singh or the booze. The first half of the story shows the tremendous amount of research done on the build up of MSD and the people involved in getting him into the Indian cricket team. Unfortunately, the story is left orphaned once it crosses that chapter. Too much focus on his love life was not just unnecessary but also slowed down the movie tremendously. I would have loved to see some focus on what exactly made him CAPTAIN COOL and at least some bits of behind the scenes portrayal of what happened in the dressing room in the 2011 WC Final. But the story just skips through that, which is a big let down.

Acting (10/10): Sushant Singh Rajput did a great job. He had a challenging role and his hard work showed in the way he projected MSD, in terms of looks as well as expressions. This would definitely go in as one of his best performances, arguably better than Byomkesh Bakshi. What I loved was the effort and the screen presence by the supporting cast – especially MSD’s friend circle and also his school coach, played by Rajesh Sharma. The last time I saw such a level of presence by supporting cast was, perhaps, in Tanu Weds Manu series.

Direction (6/10): This was definitely below par performance of Neeraj Pandey, considering his reputation. While a lot of research and meticulousness went into the first half of the movie, it was equally misdirected and vague in the second half. The story pretty much ended at the point when MSD makes it into the Indian cricket team. I felt Neeraj Pandey tends to play safe and is compelled to add romance element irrespective of the movie genre, just like he did in Baby and Special 26 where, again, it wasn’t required at all. And this is what takes down this movie. While three hours is pretty much expected in biopic movies, he didn’t utilize it to the best.

Overall (7/10): It lives up to its tagline – The Untold Story – with some great research on the life of MSD in his early years but the movie just becomes directionless in the second half. But still, a good movie to watch, at least half of it.

Storyline:A police officer from Vizag finds himself in a rut when false allegations are levied against him. He has 24 hours now to prove his innocence.User Reviews: America thinks that they are super nation and Bellam...

Storyline:The film's female lead, Naina (Preity Zinta) narrates the story. Her father had committed suicide years ago which left a deep impact on her heart. Her family is dysfunctional since her mother and grandmother...

Storyline:A 21-year old boy named Sunny (Vishal Jethwa), comes to the city on a murder contract. But he also has a penchant for sexually assaulting and murdering young girls. When he locks horns with Shivani Shivaji R...

Storyline:When his daughter decides to further her studies in London, a hardworking Rajasthani businessman does everything in power to make her dreams come true.User Reviews: This being the last movie of Mr Irrfan kha...

Storyline:In a twinkle of an eye, a life-altering disappearance of her 7-year old kid brother sets Jhalki off on a mission to find him at all costs. Armed with an intimate folk-tale of a tireless sparrow and her own c...

Storyline:Rahul Khanna and Anjali Sharma were best friends at college. Anjali realizes that she has fallen in love with Rahul but she's too late because Rahul has already fallen for Tina Malhotra. Heartbroken, Anjali ...

Storyline:Choices - to choose between right or wrong is simple, but what defines one's life is the decision between the greater of two goods or the lesser of two evils. This is the advice that Zooni Ali Beg (Kajol) re...