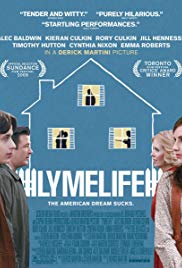 Storyline:
Set in the late 70’s, seen through the innocent eyes of a fifteen year old boy, SCOTT, “Lymelife” is a unique take on the dangers of the American Dream. This funny, sad, violent and sometimes tragic look at first love, family dynamics and divorce weaves an intricate tapestry of American life during a time of drastic economic and emotional change.
Written by
TIFF
User Reviews: Lymelife is the story of a family in Long Island’s suburbia during the 1970’s. This movie shows us how half truths and the exclusion of detail are in fact lies and even though we don’t mean them to hurt they still do. The father (Alec Baldwin) is so enraptured by the suburbia lifestyle that he’s completely forgotten that it’s not money that makes you happy, but family. The mother who only wants the best for her children doesn’t want to raise them in this judgmental place where she can’t be herself. The brother, Jimmy, (Kieran Culkin) has a typical relationship with his father where he wants to be the exact opposite of him and does so by joining the army and running away. Rory Culkin does an exquisite job starring as Scott, the main character, who is the only one who is trying to put things into perspective for everyone else whilst going through puberty and fighting his insatiable love for the girl next door who sees him as a little brother. Although all of their problems seem trivial compared to their neighbor who has lyme disease that is like a constant acid trip and is ruining his life. All in all I would highly recommend seeing this movie because as depressing as I’ve made it sound it is in fact quite lifting and a great piece of cinema.