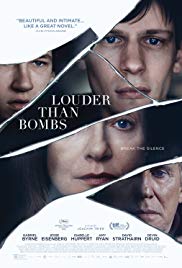 Storyline:
An upcoming exhibition celebrating photographer Isabelle Reed three years after her untimely death, brings her eldest son Jonah back to the family house – forcing him to spend more time with his father Gene and withdrawn younger brother Conrad than he has in years. With the three of them under the same roof, Gene tries desperately to connect with his two sons, but they struggle to reconcile their feelings about the woman they remember so differently.
User Reviews: "Louder Than Bombs" (2015 release from Norway/France; 109 min.) brings the story of the Reed family. As the movie opens, we see Jonah Red (played by Jesse Eisenberg) in the hospital with his wife and their newborn baby. After the movie’s opening credits, we then shift to Isabelle Reed (played by Isabelle Huppert), a NYT was photographer who perished a few years ago and is now the subject of a retrospective. The NYT reporter who worked with her is going to write a long piece on it, and gives a heads up to widower Gene Reed (played by Gabriel Byrne). Finally, we also get to know Conrad Reed, the younger brother of Jonah. Conrad is struggling in high school, and also at home. At this point we’re about 15 minutes into the movie but to tell you more of the plot would spoil your viewing experience, you’ll just have to see for yourself how it all plays out.

Couple of comments: this is the latest movie from Norwegian writer-director Joachim Trier, whose previous movie, 2011’s "Oslo, August 31st" was outstanding. This is his first English language movie, and here Trier dives into a complex family drama. It took me a while to figure out who was who, and what exactly is going on. Perhaps the emotional linchpin of the movie is young Conrad (played by newcomer–for me anyway Devin Druid), who’s sulking character at first is not very likable, but as more and more peels of the onion are removed, the Conrad character is developed deeper and fuller. When older brother Jonah urges Conrad to "sit out" the high school years, Conrad nods but of course does the exact opposite… The movie structure for "Louder Than Bombs" is further complicated because of the multiple flashbacks involving Isabelle. And how exactly did she die anyway? This movie reminded me at times of the Robert Redford-directed family drama "Ordinary People" from 1980. In other words: heavy duty stuff. I don’t know whether Eisenberg has played a better role in his still relatively young career. He is vulnerable as the older brother and the husband, trying to deal with a lot of things coming at him in life. Also keep your eyes out for a fairly small role from up-and-coming Rachel Brosnahan as Jonah’s ex-girlfriend Erin. People sometimes make good choices, sometimes bad choices, "but you can’t plan for what happens after you’ve made a choice", cautions the NYT journalist at one point. There is a lot of good music in the film, both as to the original score composed by Ola Fløttum (unknown to me), and as to other incidental music (including Tangerine Dream’s "Love On a Real Train" in a newly re-recorded and extended version).

The theater’s Sunday matinée screening where I saw this at this past weekend turned out to be a private screening, as in: I literally was the only person in the theater. That is a darn shame. I recognize that this type of film isn’t going to attract big crowds, but not even a small crowd? Jeez… Maybe this movie will find a larger audience on VOD or when it is eventually released on DVD/Blu-ray. Regardless, if you are in the movie for a heavy duty family drama that features some great performances, you cannot go wrong with this. "Louder Than Bombs" is HIGHLY RECOMMENDED!

Storyline:Normandy Is My Name is a character driven movie about 5 very different teens sharing an unwanted experience together. See what happens as they spend 30 days on a common "digital-less" journey together. Think...

Storyline:A satire on anti-communist paranoia in the days of fascist dictatorship in Portugal. The series follows the adventures of the "Lusitanian superhero," the ultra-patriotic Captain Falcao, a man who follows the...

Storyline:Though many are familiar with the Quaker names such as William Penn, Susan B. Anthony, Daniel Boone and Johns Hopkins, lesser-known Quakers also impacted society in significant ways. These are untold stories...

Storyline:Psychological thriller. A woman tries to help her sister remember the events surrounding the fatal stabbing of their mother.User Reviews: This movie is in barely different from the typical Lifetime film: bla...

Industrial Soundtrack for the Urban Decay (2015)

Storyline:A journey through the crumbling industrial cities of Europe to America's thriving avant-garde scene. Industrial music emerged in the mid 70's, providing a vibrant, provocative and artistic soundtrack to the ...