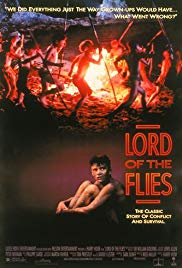 Storyline:
After a plane crash in the ocean, a group of military students reach an island. Ralph organizes the boys, assigning responsibilities for each one. When the rebel Jack Merridew neglects the fire camp and they lose the chance to be seen by a helicopter, the group split under the leadership of Jack. While Ralph rationalizes the procedures, Jack returns to the primitivism, using the fear for the unknown (in a metaphor to the religion) to control the other boys, and hunting and chasing pigs, stealing the possession of Ralph’s group and even killing people.
Written by
Claudio Carvalho, Rio de Janeiro, Brazil
User Reviews: This remake of the classic William Golding book "Lord of the Flies" is not only bad, but it doesn’t measure up. They have a glow stick on the island, and there’s an adult survivor too. What really got me on my nerves was the constant profanity. The book and the 1963 version had only one swear word in it, but this movie adaption of the book was non-stop. If you’ve already read the book and want to see one of the movies the 1963 version is the better version.

Don’t bother with this version it sucks.