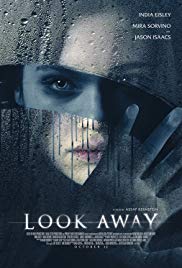 Storyline:
A lonely 18-year-old high schooler opens up to her reflection because of the lack of support she has from family and her peers. She switches place with her supportive, but evil, twin that she discovers in the mirror’s reflection, but the newfound freedom unleashes suppressed feelings.
User Reviews: Maria (India Eisley) is a timid high school senior. Her father Dan (Jason Isaacs) is a plastic surgeon who is obsessed with perfect looks. Her mother Amy (Mira Sorvino) is struggling with depression. At school, her only friend figure skater Lily is possessive of her boyfriend Sean. She gets bullied by schoolmate Mark and his friends. She starts having visions of her reflections acting differently and talking back to her. The reflection calls herself Airam.

It has the tone of a good slow moody horror without the scares. It is a bit too slow and Mark really needs to die to set it off. Mark’s bullying is problematic when the only person coming to her rescue is Sean. The skating party comes off really weird when everybody is laughing at her. There is one creepy aspect to this movie. While India is 25 and the character is 18, India looks really young and the sexual erotic aspect gets voyeuristic. It would be less creepy if she’s playing a college student. She’s a quiet actress and seems limited in range. She is able to play two separate personalities and that works better than expected.

Storyline:Tokuro Akamatsu (Tomoya Nagase) runs a transport company. One day, a truck owned by Tokuro Akamatsu is involved in an accident. A tire came off the truck and killed passengers in another car. At first, Tokur...