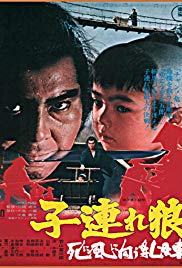 Storyline:
Ogami Itto volunteers to be tortured by the yakuza to save a prostitute and is hired by their leader to kill an evil chamberlain.
User Reviews: A wandering ronin and his young son continue their journey through feudal Japan, taking contracts when afforded the opportunity and facing assassination with each step. This chapter seems dedicated to clarifying our disgraced samurai’s complicated code of honor. Though he’ll gladly slice through an almost unlimited number of strangers in battle, Ittō’s vision isn’t clouded by a perennial bloodlust. We see restraint in several dangerous situations, respect for principled opponents, loyalty to his word and, in the film’s most memorable scene, a willingness to take vicious punishment in lieu of the innocently accused. The story feels more episodic than ever, with various scenes playing out like a classic movie serial and an unresolved conflict lingering at the credits. Given the rate at which they were churning these things out in the early ’70s, maybe there’s something to that. The action is reliably good, still fresh and creative after three feature-lengths, though the gigantic slaughter instigated at the climax (ambushed, Ittō single-handedly takes out fifty men and a trio of mounted officers) does stretch things a bit. Wise, then, that the film went back to basics almost immediately after, closing the action with an eerily quiet, respectful duel amidst the dust of that epic battlefield.

A Courtesan with Flowered Skin (2014)

Storyline:The New Yoshiwara pleasure district, in the twilight years of the Edo Period. Popular prostitute Asagiri (Yumi Adachi) will soon be freed from her indentured service. One day at a local festival, she meets y...

Storyline:Set in a future-world vision of Tokyo where the police have been privatized and bitter self-mutilation is so casual that advertising is often specially geared to the "cutter" demographic, this is the story o...

The Irregular at Magic High School: The Girl Who Calls the Stars (2017)

Storyline:In the story, the seasons have changed and it will soon be the second spring. Tatsuya and Miyuki have finished their first year at First Magic High School and are on their spring break. The two go to their v...

Storyline:In the next century, a reconfiguring ship (think "Transformer" with a pilot) called Macross carries fifty thousand refugees within its hold as it returns to Earth pursued by giant humanoid warriors. A young ...

Storyline:When a woman begins a new office job she meets a childhood friend who also works there. The two are secretly nerds and love comics, animation and other entertainment. They begin to date when they find out ab...

Storyline:Yashiro is the young leader of Shinseikai and the president of the Shinseikai Enterprise, but like so many powerful men, he leads a double life as a deviant and a masochist. Doumeki Chikara comes to work as ...