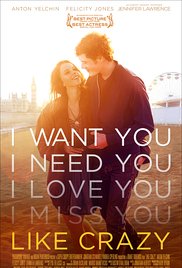 Storyline:
Anna and Jacob fall instantly in love when they meet as students at an L.A. university. But Anna is British and when graduation approaches, Anna decides to stay and violate her student visa rather than returning to England. After a visit home, she is then unable to return to the United States. While fighting customs and immigration battles, Anna and Jacob must decide if their relationship is worth the distance and the hardship.
Written by
napierslogs
User Reviews: As the movie’s title suggest, I truly wanted to fall in crazy love with "Like Crazy". By the end, I instead just gave it a pat on the shoulder and became more interested in what the stars and director would be doing after the movie than in the film that just screened. In a movie about the complications that ensue when an American guy named Jacob and a British girl named Anna meet in college, fall in love and then eventually are separated when the latter is denied entry back into the US after overstaying her visa, it’s never as compelling as it very well should have been.

"Like Crazy", a big hit at the Sundance film festival, is well-made and has some scenes of heartbreaking immediacy that give it considerable promise. Unfortunately it only shines through it’s individual moments, but as a whole it lacks a certain emotional center as the main romantic pairing, played by Felicity Jones and Anton Yelchin, is just not convincing.

Not for lack of trying. Director Drake Doremus has certainly made a lovely film out of a very small budget, and again proves (after his first film Douchebag) that he has a way of coaxing some nuanced performances out of familiar character archetypes. It’s refreshing to see a movie where people don’t always know the perfect thing to say and end up saying what they actually feel, or feeling unable to say anything at all. And his understated mis-en-scene and on-the-cheap cinematography is quite impressive, bringing a very cinematic atmosphere to "Like Crazy" despite the film’s modest means.

For the central pairing, Jones (a distinctly lovely actress with a remarkably subtle face and physical acting style) in particular brings a fascinating duality to her character of Anna: she can feel both warm and reserved, naive but very intelligent and observant. Jones slowly melds what could initially seem like a contradiction into a very real, imperfect human character that you can’t quite understand but you can feel remarkably close to, and it’s easy to see how someone could be very drawn to her. Anton Yelchin, as Jacob, has the much harder task: his Jacob has an almost too-passive interest in this love affair, but while the character on the page might be too much of a cipher, Yelchin has a clever acting style that suggests there’s more to Jacob than meets the eye.

And there’s no questioning that "Like Crazy" is a consistiently engaging and intriguing experience. There’s just a big problem when the central romance in an in-and-out-of-love story is the weakest part of film. Their relationship ultimately feels completely tied to plot, with no real sense that it would exist off camera. We become interested in Jacob and Anna individually, but never as a couple.

Jacob seems rather unwilling to uproot his life to be with her, or even borrow money from her parents so he can stay the post-graduation summer in England, and it is a bit baffling to wonder how someone as smart (or supposedly smart) as Anna would be willing to overlook his slowly growing indifference and find out far too late that their romance is dying.

There’s a bit of suspense later on, as both Jacob and Anna get romantically tempted by someone close to them (by Jennifer Lawerence and Charlie Bewley, respectively), but that plot devolpment ultimately feels as superficial and mechanical as the movie’s main immigration predicament. It’s more an affirtmation of Lawrence’s considerable talents as an actress that she takes a role as contrived as this and ends up making the audience truly feel her heartbreak. Though it’s a big problem when we’re more torn up over the affair rather than the movie’s main romance.

It’s not that there isn’t a sense of real care and affection between Jacob and Anna, but the movie just doesn’t take enough time to let us figure out exactly what exists between the two. It seems like while Anna may be in crazy stupid love, Jacob seems to see it as a passionate summer fling but nothing to change his life for. You end up wishing they would just move on and live their lives rather than root for them to make it through their immigration-complicated struggle, as the feelings just do not seem to be reciprocated. The disintegration of their relationship feels more expected and, frankly, welcome than it is heartbreaking.

Perhaps what’s hindering the central romance is that the movie is far too hurried and uneven that it doesn’t really have time to show a substantive, organic growth of Anna and Jacob’s relationship. The early scenes of Jacob and Anna’s romance are far too brief (with an excessive fondness of montages and quick scene cuts) and far too much screen time is spent after Anna’s banned from the US that "Crazy" never really has time to breathe. There’s never any time to truly reveal what would make these two would-be romantics not only connect but fall passionately in love with each other. Surely it’s more than a mutual love for Paul Simon’s "Graceland" or rides in go-karts (yep, that’s in the movie too).

Perhaps it’s a compliment to say that the film should’ve been a bit longer, but it also means we’re left needing more. The movie does have a potentially terrific ending, but too bad the charming but uncogent scenes before make it an afterthought rather than something more potent and emotional. That makes the whole experience just all the more tantalizing and disappointing. We haven’t fallen in love with "Like Crazy", we’re just enamored with what could’ve been.