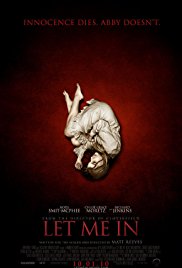 Storyline:
In Los Alamos, New Mexico, the twelve year-old Owen is a lonely and outcast boy bullied in school by Kenny and two other classmates; at home, Owen dreams of avenging himself against the trio of bullies. He befriends his twelve-year-old next door neighbor, Abby, who only appears during the night in the playground of their building. Meanwhile, Abby’s father is a wanted serial-killer who drains the blood of his victims to supply Abby, who is actually an ancient vampire. Abby advises Owen to fight Kenny; however, soon he discovers that she is a vampire, and he feels fear and love for the girl. Meanwhile a police officer is investigating the murder cases, believing that it is a satanic cult.
Written by
Claudio Carvalho, Rio de Janeiro, Brazil
User Reviews: I believe that many viewers of this movie are fans of the original Swedish movie LTROI, so I won’t be emphasizing on how much I am fond of the original one and here we are for the American remake.

That being said, I just watched the remake. In general, I am not disappointed (if not a little pleasantly surprised) by this remake, though it still cannot catch up with the original one as a whole.

Honestly, I was a little worried when I went to the cinema, being afraid that the story would be degraded into a superficial Hollywoodian fest of clichés and pure visual stimulations. Thankfully, that didn’t happen.

In general, this remake is in line with the original book (and the original movie). Many settings are almost identical with the Swedish one, so are quite a number of actors’ lines (well of course they spoke English in this one, no Svenska LOL). More importantly, the tranquillity resembles a lot to the Swedish one. We can tell see that the filmmaker had no intention to challenge the basic tone of the story, a beautiful love tale under vampire’s cover. This, on the other hand though, might disappoint some fans who watch the remake in search for a revolutionary interpretation of the old story, YMMV.

Sure, there are still many differences. The first one is the ambiance colour tone of many scenes where Owen and Abby meet. The director has obviously chosen a warmer tone (under orange-yellowish street lamp) in which our two protagonists interact, as compared to the sharp contrast of white snow vs dark sky in the original one. Personally I give credits to that change, as it better alludes to the tenderness of Owen and Abby’s friendship / love.

The real gender of Abby is one of the hottest topics amongst fans. Here, instead of giving a direct shot to Abby’s under (which I find totally unnecessary in LTROI), the director chose to interpret Abby’s gender in a very ambiguous way, leaving much room for interpretation.

Also, I feel that the American remake is more "focused" on the two protagonists than the Swedish one. "More focused" has two senses: in one hand, filmmakers tend to let Owen and Abby physically occupy a bigger part of the screen, instead of the wide-angle lens in LTROI; in the other hand, the director cut many "peripheral" scenes (scenes where actors other than Owen and Abby interact). I am personally neutral to that change, though I believe that we need not give further emphasize to Owen and Abby for a better character depiction.

OK, now time for some negative comments. As a whole, I find the remake’s interpretation of the gory scenes as a failure. They are too violent, bloody, and explicit, which, I think, largely spoils the basal tone of the movie, inserting some cheap and inconsistent horror elements in this supposedly beautiful, ambivalent movie.

Last, the music. Here I have to say LTROI’s soundtrack totally outworks that of the remake. LMI’s OST is, to its most, up to a "hardcore" horror film’s suspense scenes, whereas LTROI’s music is as beautiful, as poignant as the movie.

In conclusion, a good remake, loyal to the original story. One can tell the director’s effort to re-interpret some minor details without changing the story’s basal line/tune, though many of the modifications aren’t as successful as they expect.

Storyline:Mona has just moved to a new town and a new job, when she witness a grisly murder. She's shocked but also fascinated, and when the police won't listen, she starts her own investigations.User Reviews: Movies ...

Storyline:Five-year-old Jordan walks miles through the night in the wake of a car accident on an isolated mountain road. But when small-town Sheriff Gil Lujan finally locates the girl's missing mother, Jordan claims t...