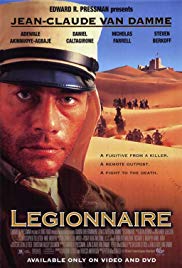 Storyline:
Alain Lefevre is a boxer paid by a Marseille mobster to take a dive. When he wins the fight he attempts to flee to America with the mobster’s girlfriend Katrina. This plan fails and he seeks escape by joining the foreign legion. As part of the legion he tangles with abusive lieutenant Steinkampf and bonds with legionnaires Luther, Mackintosh and Rosetti. The mobster discovers his whereabouts and enrolls two hit men to finish him off. With their fort under siege and enemies within, Lefevre finds that second chances are difficult to come by in the Legion.
Written by
Paul Hunter aka "Bob the Moo"
User Reviews: "Legionnaire" is one of Jean-Claude Van Damme’s more serious movies. Here, he tried to take a break from his usual action packed movies and appear in a picture that focused on story and character development. The result is a film that doesn’t really work that well in the end, but it is definitely not that bad either.

The film relies more on drama than on action scenes and in spite of the fact that this represents a pleasant departure for Van Damme from his usual movies, this is also one of the film’s main weaknesses. The movie doesn’t know exactly what it wants to be. There were times when the film was a little too slow and some of the actors seemed a little uncomfortable in the scenes that demanded some acting abilities. On the other hand, the film makes good use of its setting (desert) and it has a good atmosphere. I also found the ending to be pretty good and thought that Van Damme did a decent job as an actor, an improvement from his previous roles.

In the end, "Legionnaire" is a nearly good movie, but I had the impression that they could have made it better. Also, if I were to compare it to Van Damme’s other effort from 1998, "Knock Off", this is a lot better.