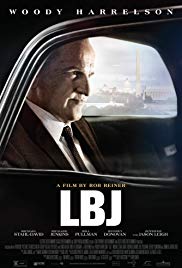 Storyline:
LBJ centers on the political upheaval that Vice President Johnson faced when he was thrust into the presidency at the hands of an assassin’s bullet in November 1963. With political battles on both sides of the aisle, Johnson struggles to heal a nation and secure his presidency by passing Kennedy’s historic Civil Rights Act.
User Reviews: Always enjoy movies of history and political ones and this latest "LBJ" is one good look at the past president from west Texas. It shows that Lyndon Johnson was a man of faith and courage despite what the no doubters and others thought of him. Johnson(Woody Harrelson) is shown as a senator who’s taken a back seat to many as he’s a southern democrat, yet things change when president Kennedy asks him to be his running mate and vice presidential candidate in 1960 and upon election, Lyndon still gets a cold shoulder from Kennedy brother Bobby and other northern democrats.

Yet all of that changes as Johnson is thrown into the spotlight and becomes president after president Kennedy is hit and killed with an assassin’s bullet in Dallas in 1963. Oh Lyndon has come along way from west Texas to the white house. Along the way doubt and indifference is found even from his own party, yet Johnson thru hard work determination and political back room workings gets the landmark Civil Rights Act passed in 1964.