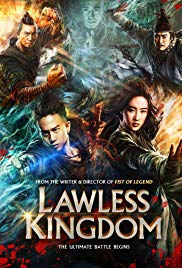 Storyline:
Four detectives (Emotionless, Iron Hands, Life Snatcher, and Coldblood), each uniquely skilled with their own individual superpowers, are sent to investigate a murder outside the city. During the investigation, they unexpectedly stumble across clues to an unsolved murder from 12 years previous that hits close to home for one of them. Suddenly, the investigation becomes all too personal, and the detectives must put their lives on the line to solve this crime!
Written by
Grindstone Entertainment Group, LLC.
User Reviews: Within a short span of a year, Gordon Chan returns with his sequel to The Four, a supposedly planned trilogy based on the novels of wuxia writer Woon Swee Oan. We highly recommend that you catch the original before you pay a ticket to this one though – else you might end up feeling sore about the constant references to the first, and even more so when the movie just abruptly ends.

Since we have been introduced to the group of misfits that formed the Divine Constabulary led by the wise Zhuge Zhenwo (Anthony Wong) in the The Four, the sequel wastes no time in setting up the events that happened after the death of the evil and powerful An Shigeng (Wu Xiubo). As it turned out, An is still not dead but, for reasons unexplained, has been transformed into sort of a parasite kept alive by his father and hidden in a cliff far away. His father, Lord An, in the mean time is hell bent to take revenge against the Divine Constabulary and he also has plans to usurp the Emperor because (well) every villain out there believe he or she deserves the throne.

Thus writer and director Gordon Chan devotes a good one hour detailing the conspiracy and plan to frame and throw Zhuge Zhenwo into jail for the murder of the head of Department Six, the official constable section of the Emperor. Zhenwo’s men are in turn thrown into frenzy after his capture and their unity is once again tested. Wolfboy aka Cold blood (Deng Chao) believes Zhenwo is hiding some deadly secrets from them especially one which involve the family massacre of his now girlfriend, Emotionless (Crystal Liu Yifei). Life Snatcher (Ronald Cheng) believes in Cold blood’s theory but Zhenwo’s trusty servant, Iron hands (Colin Chou) refused to believe in them. It’s not until the suggestion of Zhenwo’s companion, innkeeper Lady Chui (Shereen Tang in a cameo) that their internal conflict might be more than meets the eyes.

It’s a shame that Chan is not much of an impressive mystery novelist nor a crime writer as The Four 2 has neither elements to engage the audience. The question of Zhenwo’s credibility is obvious and the reliance of a single shape-shifting villainous character to do the entire dirty work is unbelievable. Even a sequence of Cold blood and Life Snatcher checking out the crime scene shouts lame. (Apparently, Divine Constabulary needs to recruit Detective Dee immediately.) Unfolding without any twists and turns till the second half with the revelation of why Emotionless’ family is massacred; Chan’s efforts are often laborious and unengaging like his earlier Painted Skin. If he thinks getting the busty Liu Yan to show some skin in a shower scene opposite Jiang Yiyan can salvage his storytelling skills, I guess Liu Yan needs to reveal more.

Making matters worse is his preference to pepper every single action scene with subpar visual effects and these prove to be more of a distraction in the decently well-choreographed action direction by Ku Huen Chiu. When it comes to the cast members, Deng Chao and Liu Yifei, who dominate the screen time, continue to emo and bore the movie with their zilch chemistry. The other two members of the Four, Colin Chou and Ronald Cheng are relegated to mere supporting roles with even lesser dialogue than the predecessor. Jiang Yiyan never ceases to tease the audience with her good turn bad or vice versa character, while Anthony Wong remains the only respectable presence in this otherwise boring martial arts flick.

Will the foursome who are blessed with remarkable Marvel/X-Men abilities reunite for the finale and take out the villain once and for all? Well, like I mentioned The Four 2 ends on a cliff-hanger and we hope Chan can gives us a satisfying answer to Lord An’s ambitious plan to overthrow the Emperor.

Storyline:The story follows a renowned detective reverting from retirement to resolve one final case, a personal case of great complexity.User Reviews: Got me at 00:32 the mountains in the background (like seeing Rock...

Storyline:A successful young man must return to his childhood small town in Texas to help his father. His father, who's ill, wants him to take over the family business, a dilapidated bar. Secretly the young man wants ...

Storyline:Ajay and Anjali set out to the city of assortment with a varied ambition each and their lives get tied up to one another's inevitably as they get cheated into the same rental accommodation by the comic fraud...

Storyline:Charlie Mason and Rusty Fleming are star reporters on a Chicago tabloid who are romantically involved as well. Although skilled in ferreting out great stories, they often behave in an unprofessional and imma...