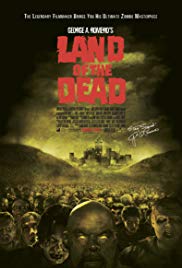 Storyline:
Now that zombies have taken over the world, the living have built a walled-in city to keep the dead out. But all’s not well where it’s most safe, as a revolution plans to overthrow the city leadership, and the zombies are turning into more advanced creatures.
Written by
Anonymous
User Reviews: There are films that had great potential but failed and it is so very obvious what went wrong that it’s hard to believe that no one during production noticed it. "Lady Jane" (1986), "Lost in Space" (1998) and "Planet of the Apes" (2001) are some examples.

The potential of "Land of the Dead" lies solely in the fact that legendary filmmaker George A. Romero returned to the theme that made him famous. It is said that only after the success of modern zombie films like "28 Days later" and the "Dawn of the Dead"-Remake, Romero was given the money to make his own new zombie film. How ironic that he, who invented the modern zombie film, would now produce a film that is inferior to Zack Snyder’s Remake of the Romero-directed "Dawn of the Dead".

FEAR is essential for any zombie movie. The feeling of "no way out". The foreboding that it will all be over soon. Hopelessness. Terror. Madness. If you know Romero’s "Night of the living Dead", or its two sequels, you know the feeling.

I know what you say know: Romero wanted it that way. He wanted to show how the remnants of human society got used to the zombies around them, oblivious to the threat. Still, it doesn’t work. How can a horror film work when we never see horror and fear, REAL fear, on one of the actor’s faces? To make it worse, there is no story in the film that would be exciting or interesting enough to make up for the lack of horror.

Due to the weak story, the acting is mediocre as well. For example, look at how Asia Argento is used, or mis-used, in the film. She is introduced by a scene where she fights against zombies in an arena. I said to myself: "I love Asia Argento. This is gonna be great!". In the next scene, Asia undresses, showing off her smart black bra. I thought: "This is even better!". Then… she puts on a chaste garment and, except for shooting a zombie now and then, does practically nothing for the rest of the film. What a waste of talent. Dennis Hopper, the other star of the cast, doesn’t seem too excited about his part either. All he has to do is perform his usual bad guy routine. When given the chance, he can be one of the best actors ever (did you ever see Bruno Baretto’s "Carried Away"?). Waste of talent.

And, by the way, I missed Tom Savini’s unique special effects that contributed so much to the horror of Romero’s "Dawn of the Dead" and "Day of the Dead".