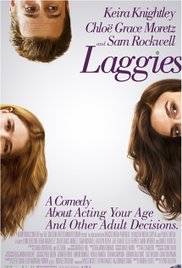 Storyline:
Megan’s approaching 30 with a good degree and a boyfriend in hand, but when he proposes at her friend’s wedding and everyone seems to think that the best way to advance in her career is to take a seminar where you find out what animal you are, Megan’s understandably feeling lost. After meeting teenagers who want her to buy them beer, Megan is drawn into 16-year-old Annika’s simpler life. She ends up moving in with Annika and her single father, juggling the life of a teen and that of an adult, two romantic interests, and the feeling of lagging behind.
Written by
Anne Campbell
User Reviews: Wasn’t expecting to like this film as much as I did.

First, Sam Rockwell has got to be one of the best actors to work with. He is naturally cool and his confidence on screen must be contagious. Have never seen who put anything but an A-Game performance out there.

Second, no one plays the girl we all want to fall in love with (who is sincere, cool, fun, and romantic) than Kiera Knightley. Kiera and Sam? Would never see it working on paper. Totally worked on the screen.

Third, Chloe Grace Moretz is one fine young actress whose resume is amazing at such a young age. Expect to see Oscars on a frequent basis from her.