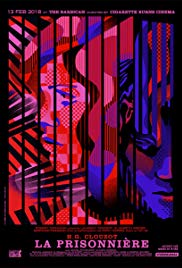 Storyline:
Stanislas Hassler blazes the development of modern art in his gallery, packed with works of surprising shapes, colours and textures, and where exhibitions turn into media events. Gilbert Moreau is one of the artists whose sculptures are on display in the gallery. His wife, Josée, is intrigued by the stern Stanislas, who devotes his free time to photography in an apartment that highlights his sophisticated artistic tastes. But besides enlarged pictures of calligraphic samples, Stanislas is amassing a collection of photographs that reveal a disturbed character. So why would Josée endanger her mature relationship with Gilbert for the morbid observation of Stanislas’s hidden personality?
Written by
Eduardo Casais <[email protected]>
User Reviews: La prisonnière was HG Clouzot’s final film and his only in colour. It tells the story of a young female film editor who meets an art dealer via her relationship with an abstract artist. She discovers he photographs erotic pictures of women. Partially appalled, partially intrigued she becomes hooked on his voyeurism and becomes one of his subjects. Its story focuses on themes of submission and dominance, with all three central characters at war with one and other to some extent.

I don’t think the message was necessarily altogether clear at times and I think something must have been lost over the years in terms of the shock we are meant to feel at the erotic material. From the perspective of nowadays in the free-for-all that is the internet age, those images that presumably would have caused some shock back in 1968 seem actually quite quaint by today’s anything-goes standards. So you do sort of have to remind yourself that this was a very different world back then in order to understand aspects such as this. I felt on the whole that the story seemed a bit under-developed and not entirely satisfying but what certainly did not disappoint me was the visual aesthetics on display. Considering this was Clouzot’s only colour movie, it does have to be said that he embraces the medium in a pretty full-on way. The use of colour is rather splendid throughout. The early gallery scenes are visually delightful with much abstract, expressionistic and pop art imagery present throughout, all beautifully framed, while the closing psychedelic hallucination sequence was a mesmerizing example of visual artistry. So, for me at least, this is a film which is mostly of interest from an aesthetic point-of-view as opposed to a dramatic one. It definitely felt like the work of a young director, as opposed to a veteran, and so indicates the boldness that Clouzot had even in his final years. It’s the sort of material that someone like Claude Chabrol could easily have been tackling at the time, except Clouzot’s film is visually much more out there than anything that young new wave director every delivered. On the whole, this is a pretty impressively uncompromising bit of cinema for Clouzot to bow out on and is certainly one that should be of interest for anyone interested not only in French cinema of the period but of counter-cultural time-capsule movies as well.

The Counterfeiters of Paris (1961)

Storyline:"Le Dabe" retired many years ago and now he lives in the Tropics where he owns stables and horses. He is a very rich man. He was the king of all money counterfeiters. He is contacted from Paris to organize a...

Storyline:Painter Paul Sloan feels he's a failure, since nobody will buy his paintings. His art dealer informs him, that the works of an artist become much more wanted and valuable if the artist is dead. Therefore, Pa...