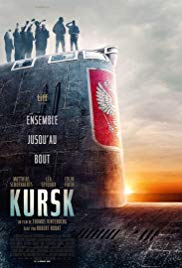 Storyline:
The film follows the 2000 K-141 Kursk submarine disaster and the governmental negligence that followed. As the sailors fight for survival, their families desperately battle political obstacles and impossible odds to save them.
User Reviews: The movie is really good, but it does not tell the whole story.

The director explains it by telling that he wanted to show the humanity of the Kursk’s crew members from one side, and the bureaucracy of the upper military officials on the other side. And that he wanted to leave the politics out of the movie.

In my opinion, the director missed one important fact from the Kursk’s story.
As you know, the sailors in Russia are drafted to serve in NAVY. And many of them are not willing to sacrifice their lives for sake of competition between superpowers. This movie misses the fact that sailors in one sinking compartment heavily beaten their officer who closed the door between the compartments, thus preventing them to escape from the doomed compartment. This fact was discovered by investigators after reading the note found on the drown officer. I think, this fact should have been reflected in the movie, too.

The second important fact is that all families of dead sailors received, first time in the history, serious monetary compensation (ten-year salary) and apartment for living in major Russian cities. And almost all of them accepted this compensation, and we cannot blame them for that!

Storyline:Everyday, three sex workers cross the border from France into Belgium to practice their trade. At the end of one particularly hot summer, all three share a secret that will bind them together forever.User Re...

Storyline:THE ICE KING is the searing documentary of a lost cultural icon, a story of art, sport, sexuality, and rebellion. Including incredible unseen footage of some of his mort remarkable performances and with acce...

Storyline:Eve meets what she thinks is a charming guy in a bar. Yet things go terribly wrong once she realizes she has come across a psychopath and his accomplice. They engage in a death chase until she decides to fig...

Storyline:After a wave of reports of mysterious attacks involving people and pets being eaten by the traditionally docile fruit, a special government task force is set up to investigate the violent fruit and put a sto...

Storyline:Hardworking and optimistic television producer, Kelly (Ali Liebert), doesn't have time for love. Along with her mentor Amanda (Janet Kidder), Kelly dives into another season of the Little Gourmet, a kids coo...

Storyline:"Death World" is a zombie anthology film of 3 stories. "The Fittest" is about college students surviving, "Lifeline" takes place in a zip-lane park, and "Reflex Action" is about a security guard driving a VI...