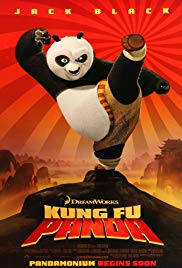 Storyline:
It’s the story about a lazy, irreverent slacker panda, named Po, who is the biggest fan of Kung Fu around…which doesn’t exactly come in handy while working every day in his family’s noodle shop. Unexpectedly chosen to fulfill an ancient prophecy, Po’s dreams become reality when he joins the world of Kung Fu and studies alongside his idols, the legendary Furious Five — Tigress, Crane, Mantis, Viper and Monkey — under the leadership of their guru, Master Shifu. But before they know it, the vengeful and treacherous snow leopard Tai Lung is headed their way, and it’s up to Po to defend everyone from the oncoming threat. Can he turn his dreams of becoming a Kung Fu master into reality? Po puts his heart – and his girth – into the task, and the unlikely hero ultimately finds that his greatest weaknesses turn out to be his greatest strengths.
Written by
Anthony Pereyra {[email protected]}
User Reviews: One of the best comedy movies I’ve seen, this animation feature is both packed with action and intelligent at the same time. It’s yet another variation on "You can do anything if you believe in yourself" and carries strong morale and educational message. But the way it’s done, the incredible visual side of the story, as well as the dialogs, is just exceptional. You can’t but love the fat Panda boy who’s dreaming about being the greatest warrior of all China only to wake up to the reality of hawing to serve noodle soup in his father’s shop. Unlike his father, who also dreamed but never found the courage to act on it, Panda follows his calling and by "luck" get chosen to be the legendary Dragon warrior by the Kung-Fu grand master, the old turtle, to defeat the evil tiger. That’s when his training and troubles start. It’s really for anyone between 3 and 100 and I laughed and loved it from the titles in the beginning to the very end. Much recommended.