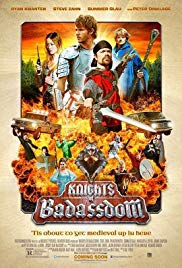 Storyline:
In a valiant but pointless attempt to cheer up their freshly-dumped friend and former Dungeons and Dragons legend, Joe, two enthusiastic Live Action Role Players–Eric, a 27-level Grand Sorcerer in the making, and Hung, a medieval Master Rogue–drag their sad companion to a large-scale LARP campaign in the middle of a forest. However, things will soon spin out of control, as a malevolently cryptic dark incantation from the pages of a seemingly innocent prop book of spells, inadvertently summons a demonic succubus bent on destruction. Now, try to stop a slaughterous extra-dimensional being with several foam sticks and a handful of plastic swords.
Written by
Nick Riganas
User Reviews: If you enjoyed "Zero Charisma" then chances are that you will also like "Knights of Badassdom". And, of course, if you are a super geeky LARP enthusiast, then you will definitely enjoy this movie. As a player of Dungeons & Dragons, but with no possible interest or understanding in the LARP thing, then I still found the movie to be enjoyable.

The story is about a bunch of geeks coming together in the forest for a weekend endeavor of LARP (Live Action Role-Playing) when an in-game sorcerer accidentally unleashes a succubus into the mortal world. Things quickly turn bloody and foam-weapons need to be exchanged for steel.

There are some really fun and inside references to everything nerdy in aspects of being a roleplaying game enthusiast; such as the Manowar and King Diamond references. Not to mention the namedropping of various monsters and races from the Monster Manual. Those who play D&D will surely pick up on those throughout the movie.

Despite the movie’s budget, then director Joe Lynch actually managed to put together a fun and enjoyable movie. The storyline was geeky, yes, but it was nice and fun to watch. And despite the nerdy geekness, then the storyline was actually very entertaining.

It should also be said that the movie had some nice talents to it, and people did great jobs with their given roles and characters (in every sense of the word). And the actors and actresses really helped the movie along quite nicely.

The effects in the movie were quite alright as well, and the demonic version of the succubus was actually quite cool, looking like something of a mixture between (and here comes one of those things only RPG nerds will understand) Tanar’ri, Baatezu and a gremlin from the "Gremlins" movies.

"Knights of Badassdom" is well worth watching if you are into roleplaying games, LARPing, or if you just had a geeky nerd hidden somewhere in your heart.

As much as I detest LARPing, then I tried not to let that color my impression of the movie. For its entertainment value, then I am rating "Knights of Badassdom" 6 out of 10 stars.