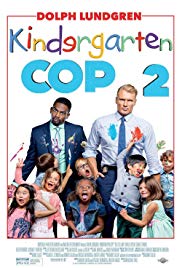 Storyline:
Assigned to recover sensitive stolen data, a gruff FBI agent goes undercover as a kindergarten teacher, but the school’s liberal, politically correct environment is more than he bargained for.
User Reviews: Alright, i saw the first movie as a kid, and it starred my (then) favourite "actor" in Arnold Swartzenagger. So of course as a kid i liked the first one. Nowhere near an iconic or classic as Commando, Terminator 2 or whatever, but still a good time. I picked it up years later and watch it again and my tough changed a bit. I tough it was a bit funny still but i guess its the kind of humour that work either on kids or old parents.

So i gave it a look and … well… its not as bad as it may look. Despite having nothing storywise to do with the first movie it does follow a similar formula, and call it a sequel or a remake, it does not matter. Its similarly entertaining as the first one and its by no mean a "bad movie".

But my biggest problem with it is Mister Lundgren’s age. He is acting and somewhat playing the role of a 35 years old (max) dude while he clearly look in his advanced 50s at least. And of course they decided to give the supporting role to a beautiful actress that look like a barely 26 years old hottie. IMDb list her as being 29 years old. The fact is, she is way too young for Lundgren and this make the whole movie awkward and unbelievable. They could had easily go with a 39 to 43 years old good looking mature lady instead, which would had made it a bit more believable.

Lets face it, Dolph does not have that much comedy background, and the movie never show how a "badass" he is supposed to be unlike Arny in the first movie. They could had give the role to Kevin Hart and it would had been much funnier and believable. Well if anything Lundgren’s partner remind me of him and have the same french voice actor too, and he serve the comic relief role somewhat.

So in the end, this movie may make you ask why they made it in the first place, but then the real question should be why not? The first one was never "that good" to begin with, and it wasn’t that terrible. This a family movie, one that you should watch with your kids and have a fun Saturday night.

I saw Dolph do better, i saw him do much worst, but in the end the movie is serving its purpose and as i said my most biggest gripe is the age factor when it comes to Dolph, who act like and is surrounded by people half his age and just do like he is 35.

Spookley and the Christmas Kittens (2019)

Storyline:Spookley the Square Pumpkin and his Holiday Hill Farm friends are celebrating the first Christmas snowflake of the season when an unusual green cat named Mistletoe crashes the party. Unable to remember who h...

Storyline:A married police captain arrives at a lake to watch the best meteor shower of the year. At a crossroads in his life, Adam gets an unexpected visit from an eccentric, single nurse. As the night progresses and...

Storyline:When a turf war between two street gangs leads to the death of a young Haitian immigrant, his mother conjures up a spell to bring her son back from the grave to exact revenge on those responsible. The code o...

Storyline:Several years-in-the-life of one of the few remaining, all volunteer, self-built Rose Parade float crews.User Reviews:

Storyline:When a family emergency forces a troubled teen to do the wrong thing for the right reason, a community discovers the meaning of forgiveness.User Reviews: Hey folks, I can enjoy a good faith based film, but t...

Storyline:When a paintball team hops the fence to go play with their friends on private property, a reclusive land-owner strikes back in full force with an arsenal of remote-controlled vehicles.User Reviews: