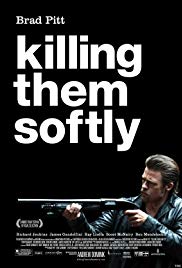 Three idiot, wannabe thieves rob a mob run cards game and make off with a ton of cash. Then Jackie (Brad Pitt), a hit-man, is called in to figure out who was behind the robbery and to take care of them. KILLING THEM SOFTLY is being called by many a masterpiece and by many others as one of the worst films of the year. I think most people are really going to hate this film because it’s just so different from other stuff out there but I’m going to fall somewhere in the middle of the two groups. While I enjoyed the style and the performances, at the same time the film just takes way too long to really get to where it’s going and there are some other questionable things that I’ll comment on in a bit. What I did like about the picture is that it’s pretty brutal and ugly in regards to its violence and characters. The film really doesn’t show any of the characters in a good light as the "good" guys are bad and the bad guys are really bad. There’s never an attempt to make you connect with these people or enjoy what they’re doing. The film also benefits from some wonderful characters actors. Pitt, James Gandolfini, Richard Jenkins, Scoot McNairy, Ben Mendlesohn and Ray Liotta all fit their roles nicely and deliver very good performances. This is especially true of Gandolfini and Liotta. The problem with the picture is that it just has way too many moments where things seem to really get dragged out. Another major problem is that the film tries to be too much like Tarantino. The scenes early one with the two thieves talking dirty about a wide variety of objects is just going to remind people of PULP FICTION. The dialogue here offers up some funny stories but it’s not good enough to really grab one and bring them into the picture. KILLING THEM SOFTLY certainly has a unique look and feel to it but in the end it adds up to very little. The Bush-Obama bits of dialogue thrown in throughout the movie also add up to a big nothing, although I’m guessing the point was that even low-life criminals have bit hurt by the economy.

Storyline:Tom Ripley has a sweet deal with an art forger. The forger creates the paintings; Tom sells them. But another criminal business associate wants Tom to go in for an even riskier enterprise: murder. Tom sugges...

Storyline:This is a British movie about a group of teens who while at a party, play a game of 'Truth or Dare', but the game gets out of hand when one of the party goers (Felix) is picked on by the other teens. A few m...