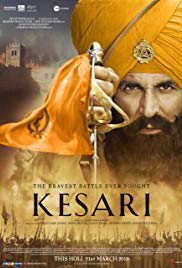 Storyline:
This period war-drama showcases the 1897 Battle of Saragarhi. The plot focuses on Havildar Ishar Singh who led a platoon of 21 Sikhs against an invading army of 10,000 Afghans to defend the North-West Frontier Province. The event is considered as one of the greatest last-stands in history.
Written by
beingdhruvnanda
User Reviews: Hats off to the producers and Akshay Kumar for picking up and showing all passion for wanting to make a movie based on this true story from the pages of less known Indian history. Akshay kumar rocks as usual and everybody seems to want to give in their best in each scene. Enjoyed it thoroughly. Hoping more such stories will keep getting made into movies.