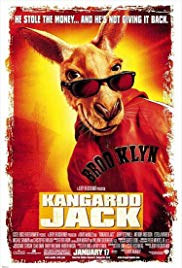 Storyline:
Louis Booker and Charlie Carbone are close friends with an association with the mob. After the duo botch a delivery of stolen TVs, the duo are given a second chance by mob leader Sal Maggio, who happens to be Charlie’s stepfather. The duo are to deliver $50,000 to a contact in Australia. As simple as the job sounds, complications emerge when a kangaroo steals the money. Now Charlie and Louis must find the kangaroo and get the money back before they find themselves in a worse predicament.
Written by
Sam
User Reviews: To be honest "Kangaroo Jack" isn’t an horrible movie. It has some solid main characters and some good comical moments and situations but it is all ruined by the story that is totally without a point and lame. Who ever green-lighted this project?

Even though he plays obviously a quite prominent role in the movie, the character of Kangaroo Jack feels totally out of place and not relevant for the movie. He feels totally pointless and makes the movie a very lame one to watch at times with some easy and childish humor and situations in it. Without his character this movie probably would had been a better one and certainly a more watchable one.

The actors Jerry O’Connell and Anthony Anderson really don’t form a bad comical duo but they are truly given awful material to work with at times. The movie feels like a waste of the two main characters. And what ever was Christopher Walken thinking? I still can’t believe that he agreed to play a part in this movie. It’s like having Marlon Brando in "Plan 9 From Outer Space". Totally out of place and below his professional level.

The movie is good looking and it’s obvious that director David McNally still has a notable talent for movie making. He still adds feeling and style to the movie even though it can’t all conceal the movie its lame and pointless story.

It’s still good for a few laughs but it overall has more minuses than pluses in it, so I wouldn’t recommend this movie to anyone unless you’re really bored.