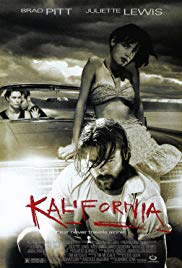 Storyline:
Brian Kessler, a journalist researching serial killers, and his photographer girlfriend Carrie set out on a cross-country tour of the sites of the killings. Sharing the ride and their expenses are Early Grayce, a paroled white trash criminal, and his girlfriend Adele. As the trip progresses, Early begins to appear more and more unstable, and Brian and Carrie begin to fear that they may have a real-life killer in the back seat of their car.
Written by
Scott Renshaw <[email protected]>
User Reviews: Kalifornia (1993)

Juliet Lewis rules on this one, and Brad Pitt is right behind. The two of them make one of the most memorable outlaw couples ever, believe it or not. Lewis is the clueless girlfriend, willingly abused by Pitt, the knee-jerk killer. The two have to leave the state and they get a ride in a big old convertible with another couple, smart and styling and at first disdainful of this hick pair they are suddenly driving cross country with.

This could have been a great movie, a classic. Lewis and Pitt are so convincing, and so original, really, playing with humor and without grandiose notions, which inflate so many other films. Individually they carve out chilling, and yet also warm, pictures of who they are, real people, and unexpected ones. The mannerisms that Lewis pulls out in every scene, her dumb looks, her surprise, this is all virtuosic.

What drags them down is the other couple. David Duchovny is especially wooden. You can feel him wanting us to think he’s a likable, even-keeled, handsome hunk. But he’s just plain dull, and he is ostensibly the main character. It’s his voice that comes in like a bad bad film noir narrator now and then, giving some perspective to the events. It’s unnecessary monologue, to boot, and straight out of screen writing 101. For some reason Duchovny’s character, a struggling writer working on a book about psycho killers, is given the most mundane and overused lines. His girlfriend, a slightly touch looking photographer played by Michelle Forbes, has to work through her part at first, but eventually comes into her own, with knowing glances and a growing sense of fear.

The other true star, beyond Pitt and Lewis, is the cameraman, Bojan Bazelli, working with some great sets and with a director who sets him free. In some scenes, the arrangement of characters just talking, is filled with such space and layer and light, or with such audacious rain, you want them to hold it longer so you can get it all. For all the ugly things that happen, this is a beautiful movie. The director? Dominic Sena, a music video shooter. That’s probably why it looked so good and had some stumbles in the bigger vision.

If you go into this expecting something profound, forget about it. But the two performances are worth the admission alone, and even though it gets increasingly violent, which I’m not into, it gets increasingly interesting and gripping as it goes. The set up in the first half hour is groaningly bad at times, but once the four of them hit the road, look out.