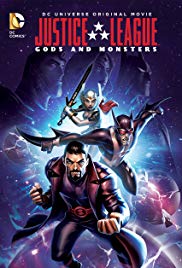 Storyline:
In an alternate universe, Superman is the son of Zod and was raised by a caring couple of Mexican immigrants living in harsh conditions, Batman is a young vampiric doctor, Kirk Langstrom, obsessed with an everlasting search for a cure for his disease and Wonder Woman is Bekka, the widowed queen of the world of Darkside. The three antiheroes unite and create the Justice League, despite wheelchair-bound Lex Luthor and others’ protests. They operate often outside of the law and often kill the villains, but the US government tolerates them and works with them to an extent, since the three are willing to cooperate with the authorities and they never kill civilians. However, the all out paranoia and protests against their methods and untouchable position are growing. Things take a turn for the worse, when they are framed for a series of murders of famous scientists, who work for the government, and President Amanda Waller orders their arrest. They decide to violently resist arrest at all …
User Reviews: I was planning on seeing this anyway, as I’ve seen all DC Universe Animated Original Movies films up to now.

I learned about this new take on Batman, WonderWoman and Superman and thought, okay, alright, let’s see where this goes to.

Then learned Bruce Timm and Alan Burnett where behind it, and it only increased my interest in it.

Saw the trailer, and thought, this actually looks good.

But I’ve been fooled before with DC Animated films.

To be honest, even though I’ll keep on watching every single one that they churn out, most of them are really bad, underperforming either in narrative or character design. In other words, they’re boring or predictable.

So back to JUSTICE LEAGUE: GODS AND MONSTERS. I just finished watching it. Compared to the more recent DC-WB Animated films I’ve seen… What a fun, smart, fast-paced, violent (not for younger audiences) movie this is.

Hope the rest of WB Animation takes a note, and even though they can’t all be for an older audience (not as violent), hope they do keep the fast-paced and intelligent narrative.

I really enjoyed it.