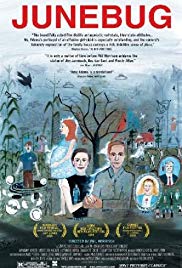 Storyline:
Successful Carolinian George Johnsten meets Chicago art gallery owner Madeleine at an electoral benefit art auction- love at first sight. Madeleine decides to meet a Southern original artist, so George seizes the opportunity to come along and present her to his North Carolina parents Eugene and Peg, drop-out brother Johny and his high-pregnant wife Ashley. Confronting the outsider soon opens a can of worms as emotions revive or emerge, like admiration and jealousy.
Written by
KGF Vissers
User Reviews: In some ways, poor southerners are the chavs of America: the one social group whom it’s politically acceptable to mock. And at first, ‘Junebug’, a film about a newly (and quickly) married Chicago girl visiting her new husband’s southern parents, appears to be just another opportunity to laugh at the southerners, although (inexeplicably) his half-witted family appear anything but poor. In fact, the movie is soon pointing fingers in both directions, and developing into a fairly subtle and complex movie about the nature of love and family; but it’s foundation remains problematic and clichéd ground, however sensitively the movie builds on it. One might see elements of Mike Leigh’s work in this film, transported of course to an American setting; but I generally find it easier to believe in Leigh’s dysfunctional families. Still, there’s a deceptive complexity to this work, even if that isn’t quite enough to make it good.