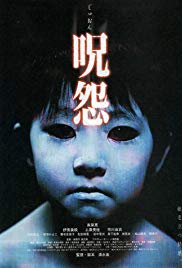 Storyline:
In Japan, when the volunteer social assistant Rika Nishina is assigned to visit a family, she is cursed and chased by two revengeful fiends: Kayako, a woman brutally murdered by her husband and her son Toshio. Each person that lives in or visits the haunted house is murdered or disappears.
Written by
Claudio Carvalho, Rio de Janeiro, Brazil
User Reviews: If you only love American cinema and hate everything not English, you’ll hate it.

If watching Ringu makes you feel that you somehow know a lot about foreign movies, you’ll just sit and compare the two. Which is too bad, because they’re both great in their own right.

On it’s own, Ju-on is fantastic. It boasts itself as a simple contained story without stretching on into some sort of epic. Where some movies will say: "We’ve got a weaved story that’s real creepy", Ju-on seems to say: "You came to watch a ghost story, and that’s what you’re getting. Now sit there as we shove your heart through your butt-hoop."

Folks, if you have issues with dead stares and good use of dark angles and sound, it’s extremely creepy.

Studios aren’t giving Sam Raimi millions of dollars to re-make this film in Japan alongside its original director for nothing. If not my word, take their’s. The only reason this film got noticed in the first place is because of its original two-part TV airings in Japan that created such a buzz, they re-shot it for film.

— Or maybe you’ll take the advice of people who’ve watched too many brainless popcorn summer movies and never watch it. Ju-on’s an Excellent flick.

Storyline:19 year old Rui finds life deeply disappointing until she falls in love with Ama in Shibuya, Tokyo. She was attracted by his piercings so decided to have her tongue pierced too. Pain is the only way that she...

Storyline:Baseball prodigy Jubeh Yakyu (Tak Sakaguchi) is the most feared and dangerous juvenile delinquent in all of Japan. After accidentally causing the death of his father with a super-powered, deadly fireball pit...

Storyline:Umekichi, a geisha in the Gion district of Kyoto, feels obliged to help her lover Furusawa when he asks to stay with her after becoming bankrupt and leaving his wife. However her younger sister Omocha tells ...

Storyline:Ayako becomes the mistress of her boss, Mr. Asai, so she can pay her father's debt, and prevent him from going to prison for embezzlement. She also sends money for her brother, Hiroshi, to pay his university...